Harry Potter and the Chamber of Secrets2002

Harry Potter and the Chamber of Secrets (2002) 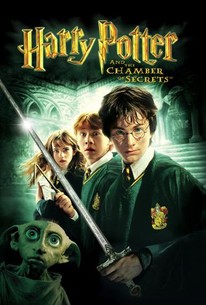 Critics Consensus: Though perhaps more enchanting for younger audiences, Chamber of Secrets is nevertheless both darker and livelier than its predecessor, expanding and improving upon the first film's universe.

Critics Consensus: Though perhaps more enchanting for younger audiences, Chamber of Secrets is nevertheless both darker and livelier than its predecessor, expanding and improving upon the first film's universe.

Critic Consensus: Though perhaps more enchanting for younger audiences, Chamber of Secrets is nevertheless both darker and livelier than its predecessor, expanding and improving upon the first film's universe.

Harry Potter and the Chamber of Secrets Photos

Youthful wizard Harry Potter returns to the screen in this, the second film adaptation of J.K. Rowling's wildly popular series of novels for young people. Harry Potter (Daniel Radcliffe) and his friends Ron Weasley (Rupert Grint) and Hermione Granger (Emma Watson) return for a second year at Hogwarts School of Witchcraft and Wizardry, where Headmaster Dumbledore (Richard Harris), Professor Snape (Alan Rickman), Professor McGonagall (Maggie Smith), and Hagrid the Giant (Robbie Coltrane) are joined by new faculty members Gilderoy Lockhart (Kenneth Branagh), a self-centered expert in Defense against the Dark Arts, and Sprout (Miriam Margolyes), who teaches Herbology. However, it isn't long before Harry and company discover something is amiss at Hogwarts: Students are petrified like statues, threats are written in blood on the walls, and a deadly monster is on the loose. It seems that someone has opened the mysterious Chamber of Secrets, letting loose the monster and all its calamitous powers. As Harry, Ron, and Hermione set out to find the secret chamber and slay the beast, speculation is rife that one of the heirs of Salazar Slytherin, the co-founder of the school, opened the chamber as a warning against the presence of "mudbloods" (magic-users of impure lineage) at the school -- and that the culprit may be fellow student Draco Malfoy (Tom Felton). Harry Potter and the Chamber of Secrets featured Richard Harris' second and final appearance as Headmaster Dumbledore; he died less than a month before the film was released in the United States. ~ Mark Deming, Rovi

Robbie Coltrane
as Hagrid the Giant

Rik Mayall
as Peeves the Poltergeist

Julian Glover
as Aragog the Spider

Toby Jones
as Dobby the House Elf
View All

News & Interviews for Harry Potter and the Chamber of Secrets

View All Harry Potter and the Chamber of Secrets News

Critic Reviews for Harry Potter and the Chamber of Secrets

Director Chris Columbus has pushed the envelope farther, made a sequel that is pacier and more swashbuckling. Yet it still feels cautious and reined-in.

This new Harry Potter has its flaws, but it's better, as well as darker, than the first.

Two down, presumably five to go, and already the franchise is entering dangerous territory: if you aren't one of the many who know their Harry Potter chapter and verse, prepare for a nap.

Radcliffe, 3 inches taller and an octave lower than last year, is growing comfortably into his character, as is Watson, the fetching and confident Hermione.

It doesn't help that Chamber is pretty much all business from the opening shot, trading in Stone's sometimes-clunky exposition for full-steam-ahead action.

At 162 minutes, this sounds like a long film, but the time passes quickly...almost too quickly. A technical and visual masterpiece.

This time, the adventures of the world's most famous young wizard come mixed with a stiff dose of the menacing.

Director David Yates deals with this change of tone skillfully.

Chamber Of Secrets is funnier and more exciting than the first Harry Potter movie, and adorned with some of the most stunning special effects ever.

Harry Potter and the Chamber of Secrets isn't perfect, but it's everything it should be: fun, exciting, humorous and stirring.

Audience Reviews for Harry Potter and the Chamber of Secrets

Again, some of the effects from 2002 look pretty damn old years later, but when it comes to cast and design the film is incredibly close to the book, making for another magical entry in the franchise. Only Moaning Myrtle is horrible. The outlandish spider scene more than makes up for it and the finale is pretty convincing too. Still, a little more nuance would have gone a long way.

This second movie is slightly superior to the first one in some aspects, as the story flows in a better pace and the mystery is more gradually developed. Again, the technical aspects are outstanding and this adaptation should please those who enjoyed the original one.

Though it may be a similar formula of detective mystery + magic + quidditch to the previous installment, the second in the series does well to introduce more of the vast range of characters and pick away at the mystery underneath. Full review later.

Harry Potter and the Chamber of Secrets Quotes