Harry and the Hendersons1987 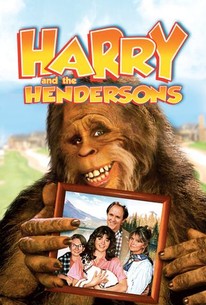 Harry and the Hendersons Videos

Harry and the Hendersons Photos

While vacationing in the Pacific Northwest, the Henderson clan's dad, George (John Lithgow); mom, Nancy (Melinda Dillon); daughter, Sarah (Margaret Langrick); and son, Ernie (Joshua Rudoy), accidently run over a strange animal with their car, and when they get out to see what it is, they find the seemingly dead body of a hairy Bigfoot-type monster (Kevin Peter Hall). Believing that the creature is a grizzly bear, the Hendersons take it home, planning to stuff the beast and put it on display in their living room. Predictably, the hirsute monster revives and is adopted by the family as a pet. Originally conceived as a TV series by comedian Brad Garrett, Harry and the Hendersons ultimately did make it to the small screen as a weekly syndicated sitcom in 1990, with Kevin Peter Hall repeating the title role during the series' first 24 episodes. ~ Hal Erickson, Rovi

News & Interviews for Harry and the Hendersons

View All Harry and the Hendersons News

Critic Reviews for Harry and the Hendersons

There's some interesting gender stuff: The dad, who works at his own father's gun dealership, is all camo-sports-masculinity, but turns out to be hiding a talent for tender artistry which the events of the film vindicate...

While E.T. had tears to spare for everyone in the family, Harry and the Hendersons is strictly for the kids.

Up there with E.T, as one of the top family flicks of the 80s

Just as Mac and Me eventually devolved into a feature-length commercial for McDonald's, Harry and the Hendersons eventually emerges as a vegetarian screed.

Spielbergian sentimentality at its ickiest

A warm and fuzzy family adventure about why you can't domesticate a sasquatch.

Audience Reviews for Harry and the Hendersons

A family hits bigfoot with their car when coming back from camping and decide to take the corpse back with them to Seattle. The problem: he isn't dead, but one of the most lovable creatures ever put on film. You gotta give Kevin Peter Hall credit for expressing a lot through his eyes, but the creators of the bigfoot suit also did a terrific job. The family friendly comedy is not exactly full of surprises but good enough for a few great laughs and the usual political correct morale at the end. The furry protagonist makes up for the cheesy parts and just makes you hope you could have one at home too.

This 80's family comedy is a passable flick and nothing more. It didn't produce a lot of laughs but it's not without it's charm.

Family movie classic indeed...easy to see why I'd always heard it mentioned from time to time.

Harry and the Hendersons Quotes