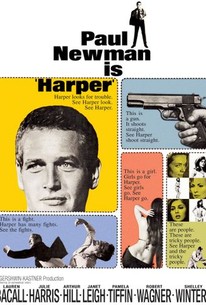 Screenwriter William Goldman has claimed that Paul Newman agreed to do Harper, the film that established the grateful writer's career, only because he was working unhappily on Lady L. (1965) in Europe, and was looking for something as unlike that film as possible. He stars as Lew Harper, a hip L.A. private dick whose business has gotten so bad that he's re-using his coffee grounds. At the suggestion of his friend, attorney Albert Graves (Arthur Hill), the detective takes on the investigation of the disappearance of the wealthy husband of waspish cripple Elaine Sampson (Lauren Bacall). After finding a photograph of former actress Fay Estabrook (Shelley Winters), Harper locates the alcoholic actress in a bar, plies her with booze, and takes her home to search her apartment while she's unconscious. There he takes a call which leads him to another bar to meet Betty Fraley (Julie Harris), a singer with a heroin problem. To curtail his inquisitive behavior, some large and unpleasant gentleman beat him up outside the saloon. Hoping for sympathy from his soon to be ex-wife (Janet Leigh), who has just filed divorce papers, the weary detective is much more successful than he has any right to expect.

China Lee
as Dancer
View All

By combining flamboyant suspense with a sunbaked slice of life and lots of good mean fun, Director Smight makes every clue a pleasure to follow.

Director Jack Smight has inserted countless touches which illuminate each character to the highest degree.

[Newman] is too fresh, too ruggedly good looking to be consistent as the sort of beat-up slob that his shady detective is intended to be and as Mr. Bogart used to be.

Supported by colorful characters (played by Lauren Bacall, Shelley Winters, Julie Harris), Paul Newman gives a solid performance in his first private detective role, which catapulted him to major stardom and brought the genre back to the mainstream.

William Goldman's adaptation of MacDonald's novel -- his first solo screenwriting credit -- is full of rapid-fire dialogue, but some of the characterizations are thin.

Newman smoulders in the lead role, a private eye hired by Bacall to find her missing husband.

No more no less than a sixties update on Philip Marlowe, with dinner theater lines given good location shooting. The mystery is only a matter of eliminating the obvious which leaves the charisma of the actors involved to carry the piece. Newman has fun as Mar ... er ... the gumshoe. Bacall is no longer the rich man's daughter but now his disgruntled wife although essentially the same character. Strother Martin as a cult leader is without a doubt just a fun casting choice.

Harper has quite the pedigree, it stars Paul Newman, Lauren Bacall, Janet Leigh, Robert Wagner, Jacqueline de Witt AND Shelley Winters. It has a screenplay by Bill Goldman that's kind of a 60's "James Bond Cool" version of a Bogart detective film. Not only that it's shot by Conrad Hall! How can this not be awesome? *Shrug* The film ends up bumbling it's awesome ingredients and turns out to be a very passable, but unremarkable Who-Dun-It. C'est la vie

A predictable detective story enriched by Paul Newman's stylish performance :P A few minutes into it and you'd probably know who the perpetrator is.

This is a spy movie where everyone is a criminal, everyone! I bet you can guess the end just by knowing that. Now, what's the point in seeing this? I wish I hadn't wasted the time. Overall, it's not bad, it's just not good either.