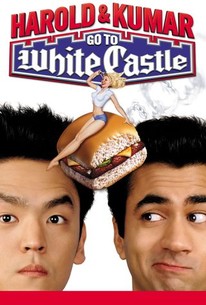 Critics Consensus: The likable leads and subversion of racial stereotypes elevate Harold and Kumar above the typical stoner comedy.

Critics Consensus: The likable leads and subversion of racial stereotypes elevate Harold and Kumar above the typical stoner comedy.

Critic Consensus: The likable leads and subversion of racial stereotypes elevate Harold and Kumar above the typical stoner comedy.

Neil Patrick Harris
as Himself

A multilayered goof on ethnic stereotypes...

Behind all the Farrelly-esque gross-out humour and Cheech & Chong-isms lies a sensitive little picture with a deftly handled anti-racism slant.

There's an audience that will appreciate this, but they may struggle to see it through the smoke.

Stretches the boundaries of offensiveness in ways that both make us laugh and make us think.

Silliness is the movie's only ambition, but there's something mind-blowing about seeing a fratty comedy through two pairs of Asian-American eyes, particularly when those eyes belong to actors who were token minorities in other dumb comedies.

A peppy, satisfying comedy that could soon become a minor classic.

To their credit, John Cho and Kal Penn do have a nice chemistry, even if they are stuck in a dead-end film.

One of the funniest films I've seen in a years.

Extremely dumb and vulgar comedy; not for kids.

'This night is about the American dream,' Kumar promises, and you know what? It sort of is. [Blu-Ray]

...for all its juvenile shortcomings, there's a sweet and beguiling charm to the film.

[img]http://images.rottentomatoes.com/images/user/icons/icon14.gif[/img] Original, unpretentious, funny and above all well written. The "buddy" road movie chemistry of Harold and Kumar, single-handedly revived the stoner comedy genre at the turn of the millennium, however stoner comedies are a kind of comedy film featuring qualities that can range from gut busting and unique, to "Freddy Got Fingered". However this one feature some extremely likable and refreshingly hilarious hero's who sideline the expected racial stereotype humour by giving them a witty and clever character twist, whilst understanding who it's audience is, and offering gross out, in your face laugh out loud humour. It combines raunch, sweet overtones and witty dialogue chopped full of laughs held nicely together by energetic performances from the leads. My only criticism is that many film fans will go and watch "White Castle" with no plausible intention of being baked in the process. That said as somebody who saw this equipped with nothing more than a small soft drink and a bag of popcorn I found enough laughs in it, I can only imagine how hilarious this must be if you're on weed simultaneously. But for me, I see it as easygoing, ridiculous, emotionally engaging fun with enough high and low brow moments to satisfy those who appreciate how good modern comedies can actually be if they bothered to try. After all if it weren't for the outstanding success of Harold and Kumar we wouldn't have stoner comedies like Seth MacFarlanes overly embraced "Ted" and David Gordon Green's Pineapple Express. The best compliment you can give the film is that it's a stoner comedy masterpiece, and it is.

A semi-offensive flick that doesn't take itself seriously... like at all. I'm one of the few people that have seen the 3rd installment before watching the classic "White Castle" iteration so I see how the roots started it all, and frankly, "White Castle" is a dumbed down version of "Christmas 3-D". Yeah, it's "kind of" entertaining, but it's rarely and it's horribly made. Poster says, "From the director of 'Dude, Where's My Car?'" That's not a good way of advertising. Shot, directed, and edited horribly. Other then that, "White Castle" is somewhat of an entertaining road-movie, but if you're looking for high-laughs that split your insides, "White Castle" ain't it. It's sequel does a better job.

Hilarious and ridiculous stoner comedy that succeeds by not only being consistently funny, but also smart, witty, and not devoid of substance. Having a Korean American and an Indian American as the heroes of a stoner comedy is refreshing. It's great to see a movie that touches on issues of identity from these viewpoints, and it's even better that it's done with humor. Even though it is one of the many movies to use the trope where the journey is more important than the destination, I'm a huge fan of those types of movies, as well as that belief in general. Even in my own life I see the journey being more important than the destination. This is a great movie that I highly reccomend. And to think, it's all about identity and perceptions of stereotypes, but it's guided by the simple premise of two stoners whose simple trip to deal with the munchies turns into an overblown madcap adventure that involves all sorts of ridiculous situations and colorful characters. That's something awesome, right there.

The epic stoner tale of two friends who are on a mission to eat White Castle burgers. This is the plot to 'Harold and Kumar Go to White Castle' and while it is relatively simple, there is a lot of funny stuff that happens along the way. The humor is gross, rude, and at times vulgar, but the impeccable chemistry between the two likable leads makes everything work. The jokes are hilarious and the cameo appearances of Neil Patrick Harris is just icing on the cake.