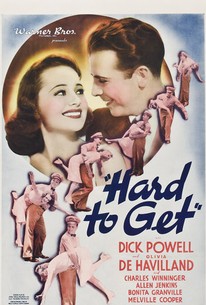 Hard to Get Photos

Dick Powell had already played the poor guy who falls for rich gal in Happiness Ahead (34); Hard to Get is a far superior film in this vein, and with better songs to boot. The wealthy lady in this film is Olivia de Havilland, who at this point in her career specialized in spoiled heiresses. Dick Powell is a gas-station attendant who doesn't recognize de Havilland and refuses to give her credit when her car goes on the blink. She gets even in several nasty ways, but softens when she falls in love with Powell--thanks to a little nudge from her kindly daddy, Charlie Winninger. As in Happiness Ahead, it is the father who financially smooths the path for the loving couple. Powell only has two songs, but one of them is the surefire hit "You Must Have Been a Beautiful Baby." Ironically, the title Hard to Get had been previously been used in 1929 for a silent Warner Bros. comedy about a poor girl falling for a rich boy.

Lotta Williams
as Maid
View All

Critic Reviews for Hard to Get

There are no featured reviews for Hard to Get at this time.

Hard to Get Quotes