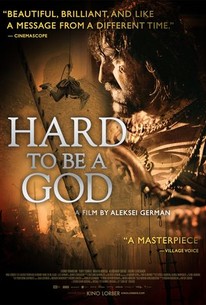 Critics Consensus: A sci-fi epic with palpable connections to the present, Hard to Be a God caps director Aleksei German's brilliant filmography with a final masterpiece.

Critics Consensus: A sci-fi epic with palpable connections to the present, Hard to Be a God caps director Aleksei German's brilliant filmography with a final masterpiece.

Critic Consensus: A sci-fi epic with palpable connections to the present, Hard to Be a God caps director Aleksei German's brilliant filmography with a final masterpiece.

Hard to be a God Photos

When legendary Russian auteur Aleksei German died in 2013, he left behind this extraordinary final film, a phantasmagoric adaptation of the revered sci-fi novel by the Strugatsky brothers (authors of the source novel for Tarkovsky's STALKER). HARD TO BE A GOD began percolating in German's consciousness in the mid-1960s, and would actively consume him for the last 15 years of his life. Happily, he brought the film close enough to completion for his wife and son to apply the finishing touches immediately after his passing. Taking place on the planet Arkanar, which is in the midst of its own Middle Ages, the film focuses on Don Rumata, one of a group of earth scientists who have been sent to Arkanar with the proviso that they must not interfere in the planet's political or historical development. Treated by the planet's natives as a kind of divinity, Don Rumata is both godlike and impotent in the face of its chaos and brutality. (C) Kino Lorber

News & Interviews for Hard to be a God

View All Hard to be a God News

Critic Reviews for Hard to be a God

German died before it was completed; it was finished by his wife and son, Aleksei German Jr, also a director. And to be honest, it's the kind of film that could kill off a fair few audience members as well.

The film is about observation: its powerless, farcical, unquenchable curiosity. And it's about - imagine a drama hewn from Heisenberg's uncertainty principle - how observers become actors or influencers, whether they want to or not.

A slo-mo kaleidoscope of chaos and also a relentless prose poem of fear, featuring three hours' worth of non-sequitur dialogue, where each line is an imagist stab with nothing to do what has just been said.

One of the greatest movies to be released this year and perhaps any other, though it's hard to feel entirely at peace with the fact that it exists.

If you're a fan of 'Andrei Rublev' and 'Stalker', don't miss this monumental film.

Aleksei German's immersive cinematic vision is like the mucky, muddy parts of "Monty Python and the Holy Grail" scrutinized, lionized, and revitalized to the nth degree -- call it The Knights Who Say "Nyet!"

This is hardcore art-house cinema and not for the impatient or squeamish, but many images and performances keep haunting you afterwards.

Hard to Be a God, to say the least, can be seen as a flexible metaphor for the unchanging state of both Soviet and post-Soviet Russia.

Every second feels authentic, like looking into a completely different yet fully realized world.

A cinematic behemoth, an unshakable monochrome nightmare of squelching bodily discharges that inhabits a world so noxious you can almost smell the pungent deterioration of humanity as it spews forth from the screen.

An allegory of Russian barbarism.

Audience Reviews for Hard to be a God

Three hours of shit, piss, pleghm, blood and semen. It was an experience. If this sounds redactive, it's only because I was expecting something more from the intriguing premise. Alas I found the narrative incoherent and the characters are all so vile that I was never gripped (though I was never bored either). On a technical, physical and atmospheric level, the film is undoubtedly a huge success.

Hard to be a God Quotes