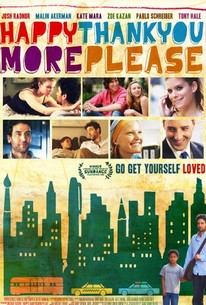 Josh Radnor (CBS' Emmy-nominated How I Met Your Mother) wrote, directed and stars in happythankyoumoreplease, a sharp comedy centered on a group of 20-something New Yorkers struggling to figure out themselves, their lives and their loves. On his way to a meeting with a publisher, aspiring novelist Sam Wexler (Radnor) finds Rasheen, a young boy separated from his family on the subway. When the quiet Rasheen refuses to be left alone with social services, Sam learns the boy has already been placed in six previous foster homes and impulsively agrees to let the boy stay with him for a couple days. Dropped into Sam's chaotic, bachelor lifestyle, Rasheen is introduced to Sam's circle of friends; Annie (Malin Akerman) who has an unhealthy pattern of dating the wrong men, as well as an auto-immune disorder which has rendered her hairless, Mary-Catherine (Zoe Kazan) and Charlie (Pablo Schreiber) whose potential move to Los Angeles threatens their relationship, and Mississippi (Kate Mara), an aspiring singer/waitress who tests Sam's fear of commitment. When Sam's unexpected friendship with Rasheen develops, he realizes adulthood is not about waiting for the right answers to get the life you want, but simply stumbling ahead and figuring them out in the process. Featuring a brilliant young cast and music from breaking indie musicians, happythankyoumoreplease deftly captures the uncertainty and angst of what it is to be young, vulnerable, and desperate to find out who you are - or perhaps more importantly, who you want to be. -- (C) Hannover House

Dana Barron
as The Gynecologist

Kate Mara
as Mississippi
View All

It's sluggish and trite and irrelevant in a way that suggests that the TV soundstage is a kind of hothouse that Radnor doesn't leave often enough.

[A] perky, if undistinguished, emulation of a mid-period Woody Allen relationship comedy...

A case of when bad scripts happen to good actors. Given its similarities to a bygone sitcom, one might call it Friends without benefits.

There is a sweetness to Radnor's character and to his film. What there is not is a sense of urgency, of a desire to find out what happens next.

It's an observant and heartfelt film, with turns of dialogue that show that writer-director Josh Radnor really can write.

At film's end you will find yourself saying what I did - happy-thank you- more, please!

It's the kind of generic indie we see dozens of times each year, with middling relationship problems and precious little at stake in an anachronistically affordable Manhattan.

Happythankyoumoreplease is a charming and refreshing romantic comedy. Radnor is great in the role and provides an uplifting and enjoyable film.

Let's hope "The New Zach Braff" learns from the original Zach Braff to strike while the iron is hot and not dither away his potential waiting for that perfect "next project" to come along.

Joseph Proimakis
Movies for the Masses
View All Critic Reviews (53)

Really wasn't expecting much, but this was a lovely movie. Cast are all excellent and it had several stories running at once, all of which I enjoyed. The character with alopecia was something different and very nicely written.

Bravo Josh Radnor. BRA-VO. I love him as Ted on HIMYM (and I also happen to love the character of Ted, unlike haters who prefer Barney as their man of the half-hour), and now, I really dig Radnor as a writer. "HappyThankYouMorePlease" didn't have a lot going for it. Its clunky-ass title aside, a quirky independent romantic dramedy about six 20-30 somethings in New York City? So played out. In spite of that title though, Radnor has written a pretty mellow script that doesn't smack of an agenda. The inciting incident of Sam taking in Rasheen, a lost African-American boy, isn't about white liberal guilt like in "The Blind Side." They just become friends. Sam fosters Rasheen more out of selfish reasons than altruistic ones: he enjoys being looked up to, he enjoys fucking up his own life. The movie's also not THAT quirky, in comparison to "Garden State" or "Juno," both of which I do love. I think Radnor's going for realism here, and I think he succeeds. The few quirks that happen - Sam and Mississippi's three-night-stand or Annie's Alopecia Awareness Party - are tempered with subtle regret (in re the former) and forced gaiety (in re the latter). The intertwining stories are also not THAT intertwining, in comparison to "Love Actually" or *gag* "Valentine's Day." There's no huge payoff - oh this person knows this person and oh that person is that person's long-lost half-second-cousin-twice-removed. It's just some people - some are friends, some are lovers, some are strangers, some are children of parents' best friends so they call each other "cousins" (but that's established early on in the movie) - and it's just some stories. The theme of gratitude isn't entirely evinced in ALL the stories, and I can see how that can be a criticism, but honestly, I'm glad it didn't smack me in the face. I love the veiled Woody Allen observation that Mary Catherine makes, "Why one movie a year? Why not one every other year?" because I LITERALLY heard someone say those EXACT words the other day, which goes to prove, every movie I'm seeing right now is about me [at the time of original viewing]. I wonder if non-Woody Allen fans won't get the reference or if they do, find it pretentious. I think it still works though cuz A) Woody's name isn't mentioned, so those who get it will chuckle and those who don't will just let it go, and 2) That line and other pro-NYC/anti-LA litanies are delivered by Zoe Kazan, who has kinduva shrill voice and kiddish demeanor. A character can be whiney and pretentious; a movie catered to a general audience shouldn't be. As for Josh Radnor's acting, it's plenty serviceable. People complain that he's just playing Ted. Well, so what? It goes with the role. Wait for him to uglify himself and play a murderous transvestite prostitute. Then people will respect him. Anyway, he does provide subtle changes. Sam is a little edgier than Ted - definitely more cynical and pushy (in regard to the boudoir...). Radnor brings just the right amount of sleaze. The other supporting actors/characters are quite delightful too, especially Tony "Buster Bluth" Hale as Sam #2. He really does become quite a stud. Can I also say how much I love Kate Mara? I was hoping she'd get the role of Lisbeth Salander instead of her sister, but oh well. She has such an interesting mouth, a Joker-esque grin. Her rendition of Kander and Ebb's "Sing Happy" is wonderful as well. Her cabaret-style soprano is reminiscent of Katie Holmes'...but better. The happy montage underscoring her song and the cut-to-black is also a sweet, subtle close. The only change I would make to the end is that instead of cut-to-black, I want Sam to go up to Mississippi and earnestly say, "You looked very pretty" (like Rasheen suggested earlier), then fade-to-black.

So good!! Josh Radnor is a very charming, and funny actor (and a good director, I might add). This little Independent project of his turned out to be a very fun, and endearing, movie. Love the witty dialogue, and the musical montage ending that gives "closure" to all the story lines within the film. Very enjoyable!

Josh Radnor, better known as "Ted" from sitcom How I Met Your Mother, directs, writes and stars in happythankyoumoreplease, a beautiful dramedy with a pleasant, offbeat soundtrack. Already a winner at Sundance, Radnor shows real promise as a director and even more so as a writer. I loved how his characters are fully relatable but just a little bit twisted. They're brought to life in great performances by Radnor, Malin Åkerman, Zoe Kazan, Pablo Schreiber, Kate Mara and especially Tony Hale.