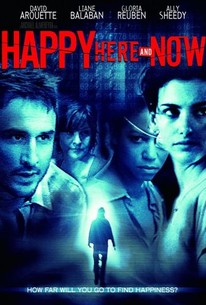 Critics Consensus: Happy Here and Now has a rich setting and some interesting ideas, but the story frustratingly refuses to spark to life.

Critics Consensus: Happy Here and Now has a rich setting and some interesting ideas, but the story frustratingly refuses to spark to life.

Critic Consensus: Happy Here and Now has a rich setting and some interesting ideas, but the story frustratingly refuses to spark to life.

Drawn into a menacing underground world of the New Orleans elite while searching for her missing sister, Muriel (Shalom Harlow), Amelia (Liane Balaban) is aided in her investigation by ex-CIA agent Bill (Clarence Williams III) in this effort from Nadja director Michael Almereyda. Soon discovering mysterious webcam footage on Muriel's laptop computer that will seemingly aid them in finding Amelia's sister, the duo is confronted with shifting identities in a scene where no one is quite who they appear to be on the surface. An obscure and disturbing study in the nature of avatars in the age of technological isolation, Almereyda's haunting drama soon leads Amelia and Bill into a complex web buried deep in the underground of a mysterious and sometimes menacing city.

John Sinclair
as Himself

Johnny Sinclair
as Himself

Ernie K-Doe
as Himself

Antoinette K-Doe
as Herself

The future is quieter, emotionally subdued and grayly mysterious, at least in the small hop forward imagined by filmmaker Michael Almereyda.

This is a droll, laid-back film noir steeped in Crescent City atmosphere and music that culminates in the colliding worlds of genuine and virtual reality.

Michael Almereyda's muddled Happy Here and Now should have stayed on the shelf -- where it's been gathering dust for several years.

Michael Almereyda's futuristic mystery isn't a complete misfire, but it does leave you with the same baffled blankness that suffuses his isolated, techno-dependent characters.

A bit too mannered to engage.

Strange but intriguing pic about alienation from the modern-day tech world.

The film is resolutely committed to its affectations of deepness and meaningfulness, but all it imparts is a sense of tediousness.

Casts an undeniable and lingering spell for those who enjoy their cinema spiked with adventure and philosophy.

Even if you're not quite down with Almereyda's digital-age existentialism, he has impeccable taste in music.

The dialogue is much like a bull session in a college dorm room, right before the munchies set in.

[font=Century Gothic]"Happy Here and Now" starts out with Amelia(Liane Balaban) venturing to New Orleans to look for her missing sister, Muriel.(At the same time, a firefighter is agonizing over the loss of a fellow firefighter.) Bill(Clarence Williams III), a former CIA Agent, now cab driver, is helping with the search and uncovers a connection to an Eddie Mars who Muriel was communicating via the internet.[/font] [font=Century Gothic][/font] [font=Century Gothic](And what all of this has to do with Nikola Tesla, Blaise Pascal and the price of 7-Up in New Orleans, I have no idea.)[/font] [font=Century Gothic]"Happy Here and Now" begins well and ends up being totally incoherent. Basically the movie wants to be a commentary about not being able to commuicate with our fellow human beings, thus resorting to the company of computers instead. But if you want to chat with people on the internet all day long, be my guest.[/font]