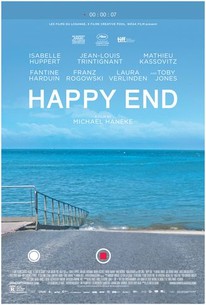 Critics Consensus: Happy End is far from Haneke's best work, yet it still succeeds in forcing audiences to confront -- and uncomfortably consider -- the dark side of human nature.

Critics Consensus: Happy End is far from Haneke's best work, yet it still succeeds in forcing audiences to confront -- and uncomfortably consider -- the dark side of human nature.

Critic Consensus: Happy End is far from Haneke's best work, yet it still succeeds in forcing audiences to confront -- and uncomfortably consider -- the dark side of human nature.

Michael Haneke returns with a drama about a well-off French family living in a bourgeois bubble in northern France, oblivious to the human misery unfolding in migrant camps around the port town of Calais, a few miles from their home.

Jumanji: Welcome to the Jungle Is Certified Fresh

If Michael Haneke should die before he wakes, I pray the Lord his soul to take, along with this half-baked sequel to his magnificent Amour (2012).

The film remains interesting, if not particularly eye-opening, until it reveals how the characters are related. Then it becomes the sort of sardonic chronicle of upper-middle-class discontentment that Claude Chabrol did better with less portentousness.

"Happy End" is an art film in the classic sense - ambitious, provocative and hard to shake off.

Formally Happy End is a crafty piece of work, but as a social critic Haneke is less convincing than ever.

Happy End will likely go down as a minor film from a major filmmaker, which is enough to make it worth your while if you can take the emotional hit.

If you're looking for timeless analysis of the ludicrous resilience of the ruling class, see Buñuel's deliciously surreal Discreet Charm of the Bourgeoisie.

[A] disturbing treatise on family and institutional corruption.

The level of intelligence, precision and discipline involved boggles the mind.

Wickedly superb social satire, and the little bit of sugar evident in [Haneke's] latest formulation only allows the lacerations to cut deeper.

It remains an uncomfortable, precise piece, with extraordinarily well-directed actors.[Full Review in Spanish]

Rich people problems: who cares? I certainly couldn't care less, that is, unless Michael Haneke is directing a movie about them. When acquainting oneself with the prolific Austrian director's initial trilogy The Seventh Continent, 71 Fragments of a Chronology of Chance, and Benny's Video, one gets the impression that, regardless of class distinctions, the fellow either hates mankind or can sympathize enough with any one of us to excuse murder. We're all one bad decision away from murder or suicide. All the bad decisions and circumstances that lead a person to violence should be indicative enough as to why. Haneke decides not to focus on the desperate struggle for survival that would compel a person to acts of extreme violence and hatred but rather the idle nature of modern life and encroaching pessimism that has spurred on so many awful events in recent years. Per Haneke's obsession with onscreen screens, Happy End opens with a 12 year old girl's phone video of her killing the pet hamster with her mother's anti-depressants, then there's CCTV footage of a structural collapse at work site owned and operated by her aunt (played by the always enchanting Isabelle Huppert). The girl (Fantine Harduin) has to go live with her previously absent father and his well-to-do family due to the girl's surreptitious and similar treatment of her mother. In their house she witnesses the disingenuous behavior of adulthood while Huppert struggles with the legal and interpersonal consequences of the industrial accident. Much like The Seventh Continent, there's a cute young girl meeting her demise due to societal ills. Much like 71 Fragments..., disparate story lines concerning everyone involved congeal by the third act for some existentially unsettling moments of European ennui. And much like Benny's Video there's video documentation of childhood loss of innocence via a naive murder. Based on various synopses I've read of the movie, this is supposed to be related to the refugee crisis, but you only really encounter that problem on the outskirts of the narrative. For the most part, the film concerns an upper middle class family dealing with a pervasive death drive while everyone around them is just trying to get by. Jean-Louis Trintignant plays the declining elder patriarch of the family in an alternate reality version of his character from Haneke's Amour. His pragmatic view of mortality is that life is best left to those who want it or are able to appreciate it, no doubt a projection of Haneke's own depressing personal philosophy. At one point describing the horror of experience, Trintignant muses to Harduin that seeing death and violence on TV doesn't seem to bother one as much, but in person it's enough to make your hands shake. Most of the violence in Haneke's oeuvre occurs off screen, around the corner, from a distance, or on another screen within the film. In the final moments of the film, the girl resorts to her phone to witness such a Happy End. Perhaps it's to divorce herself from the reality of what's happening, perhaps to keep her hands from shaking, or maybe so it's as real as the rest of her emotions and experiences.

Unhappy start. Walked out of this at the early scene of animal cruelty. To the long litany of the tormenting and killing of animals for entertainment, sport or in the name of the so-called arts, we now have Haneke's hamster. And to add to the vileness, the treatment of this animal receives a parallel with the mother. Wasn't it this director who filmed the smashed aquarium and the fish suffocating on the carpet - unfortunately I remembered this too late to avoid the film. Should have known better. The half star is because you cannot post without putting a rating, so the little animal can have it. For the film - minus five.

Although I like to see Haneke exploring modern technology, he seems more interested in crafting a compilation of some of his best moments from previous films, which makes this cynical family drama feel like more of the same and less hard-hitting or cynical as it should be.