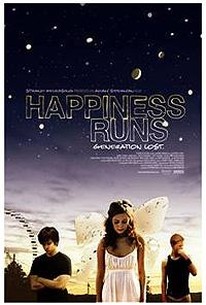 A young man raised in a polygamous cult struggles to escape with his childhood love. Victor (Mark L. Young) may have been raised in a hippie commune, but he never bought into the philosophy laid out by shady guru Insley (Rutger Hauer), who uses a technique called "running" to entrance and seduce his devoted female followers. Becky (Hanna Hall) was fortunate enough to get out of the cult while she was still young, but now her father is terminally ill and she must return to care for him. Victor has always loved Becky, and now he's being haunted by psychic visions of her untimely death. Meanwhile, the adults in the community remain blind to the damage that exposure to sex and drugs has had on their self-destructive offspring. Now Victor wants out, and he wants to take Becky with him. In order to finance their flight, he starts selling pot. When that plan backfires and Becky falls into a downward spiral, Victor resorts to desperate measures in a last-ditch effort to save her life. ~ Jason Buchanan, Rovi

An astoundingly bad memory piece that blows its potential dramatic heft at every turn.

This strident exposé may gladden the hearts of some anti-'60s conservatives, but it is a shapeless mess steeped in prurience.

Rarely has anything so lurid seemed so downright mundane.

O.K., life without structure or purpose leads to disillusionment and angst, but we knew that already. I'll be darned if I know what deeper lesson we're supposed to learn after suffering through 88 minutes of misery.

Happiness Runs wears its air-quote truth like a protective cloak, to fend off dismissals of its narrative inadequacies: after all, if it's based on a true story, how could it not be infused with hidden profundity?

Sherman's macabre dream-fueled imagery elevates the material from solely navel-gazing, but only slightly.

"Callow" would be too kind a description of this messy, unoriginal and dull treatise of a filmmaker's youthful years in a commune.

An unexpectedly subtle coming-of-age film, Happiness Runs is also something of an allegory for Generation X's conservative reaction against the flower-power excesses of their baby boomer progenitors.

The film builds on a fascinating cautionary tale, but doesn't develop its characters past whatever movie-of-the-week crisis each suffers from.

Disturbing, uncomfortable, and somehow pervasively dull. I kept waiting for an actual plot to develop, but it never really does.