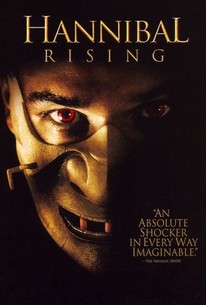 Curious filmgoers looking to get better acquainted with the silver screen's most notorious cannibalistic serial killer are sure to get their fair share of shocks and thrills as director Peter Webber teams with author Thomas Harris to explore the early life of well-read psychopath Hannibal Lecter. Based on author Harris' gruesome novel of the same name, Hannibal Rising travels back in time to World War II-era Lithuania, where an impressionable, well-to-do young boy named Hannibal (Gaspard Ulliel) was forced to watch helplessly as his family was massacred and his young sister suffered a terrifying fate at the hands of desperate, famished soldiers. After seeking temporary shelter at the Soviet orphanage that was once his family's home, Hannibal later flees to Paris in search of his long-lost uncle. Though his uncle has passed away, his uncle's beautiful Japanese widow, Lady Murasaki (Gong Li), warmly accepts the frightened orphan into her home. But even the love and kindness of this generous stranger isn't enough to calm the raging storm that is brewing inside this troubled young boy. Plagued by nightmares and determined to seek vengeance on the murderous war criminals who brutalized his family, the profoundly disturbed but academically gifted Hannibal enrolls in medical school in order to hone the skills that will allow him to exact horrific justice.

Charles Maquignon
as Paul the Butcher

Thomas Harris is now hoodwinked by his creation's faux pedigree. He's scripted him a ridiculously Eurotrashy upbringing, one so silly, it'll remind you of Dr. Evil's memory-tripping: "Summers in Rangoon, luge lessons..."

Hannibal Rising is basically a Steven Seagal vigilante movie with a hero who eats the people he kills. At least it's ecofriendly.

In the finest tradition of TV newsmagazines, Hannibal Lecter's penchant for serial murder turns out to be the result of a traumatic childhood.

What this nasty, brutish movie left me feeling was ashamed to be American. First of all: As a folk archetype, a supervillain for our times, this is the best we can come up with? A vaguely Eurotrash schoolboy who eats people's cheeks?

Tilting his elegantly aquiline features downward while hoisting one eyebrow over a dark orb, curling his lips with Grinchian deliberation, he seems to be determined to kill people on the strength of his cologne alone.

If they were going to show how he got to be the brilliant, charming, exquisitely cultured, uh, vicious cannibal psychopath -- couldn't they have come up with something more interesting?

[Hannibal Rising] shows us the death of a little boy, and the birth of a monster, but at no point does it make us want to look over our shoulder.

In a nutshell, it's all about the hideous ways of killing, flesh-pounding images, slain heads, blood and gore.

[Hannibal Rising] is a handsome and involving macabre drama, with a pathos that tempers the horror-movie shocks.

The guy's about as intimidating as a mildly irritated kitten, and that certainly doesn't up the creep factor.

Over twenty years after "Hannibal the Cannibal" made his film debut in Manhunter, the Dr. Lecter saga peters out with this misguided sequel.

Not only an unnecessary prequel but also terribly written: overlong, filled with clichés and ridiculous dialogue, and failing to depict the character's evolution to become a monster in a believable way - and Gaspard Ulliel is absolutely awful.

A well made film with great locations, that explains a little about how Hannibal became to be what he is in The silence of the lambs. However I feel a lot is still unexplained and wouldn't be surprised if a further film takes us right up to date with his story, to the point of him being in prison at the start of The silence of the lambs. Still better than Hannibal though.

Harris did the screenplay of his own book, so he has no-one but himself to blame in that regard; however, the blame only partly lies with the script - the acting is very uneven and the casting in some cases abyssmal (Murisaka is attrocious - reduced to "Oh Hannibal" - showing no depth or nuance). Much more should have been made of who she was and how she relates to the young Hannibal, but alas. There were also attempts made to show that the Inspector was sympathetec, but too little, too late - I feel that to have gone in depth into those areas would have made a far different, and for my money, a better film, but some studio exec probably pushed for a more action type thriller. As a thriller there is some small merit here - the way in which Hannibal blithely walks right into danger; he's either so warped by his traumatic experience or so bent for revenge that he feels invincible or he simply doesn't care. There are some nice cinematic elements, especially the beginning scenes with the war going on all around the chateau, but in the end I felt unfulfilled (pun intended) - perhaps a nice chianti.... ah never mind.

It's hard to ignore the fact that "Hannibal Rising" (both the novel and the film) were made with the best of intentions. Shedding light on the backstory of such an iconic villain is a lofty goal. The film features good acting, clear direction and nice cinematography. But for me, the overall story, while plausible, just does not do anything for me. The biggest reason is that it all makes so much sense. There are no surprises here. The progression of Hannibal Lecter is very straightforward and obvious. For attentive viewers there are nods to the next three films sprinkled throughout this one, which I found a little cheap. In the end, the worst crime "Hannibal Rising" commits is that it's boring. Like I said, everything is so clearly drawn out that all the mystery of Hannibal is taken away and there is nothing left to pull you in.