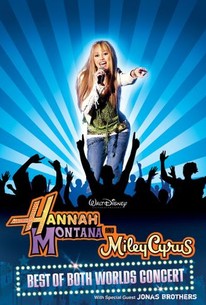 Critics Consensus: This high-energy concert film should please Cyrus' rabid pre-teen fan base -- and may come as a pleasant surprise for parents.

Critics Consensus: This high-energy concert film should please Cyrus' rabid pre-teen fan base -- and may come as a pleasant surprise for parents.

Critic Consensus: This high-energy concert film should please Cyrus' rabid pre-teen fan base -- and may come as a pleasant surprise for parents.

Fans of Miley Cyrus and her pop-star alter ego on her series Hannah Montana get the best of both worlds with this live concert film. Shot during her 54-city musical tour, this concert captures Cyrus performing both as herself and as Hannah. She perform a handful of song with The Jonas Brothers. THe directors also include footage of the performers backstage. The film is presented in Disney Digital 3-D, providing the most realistic concert experience possible.

Little more than a Disney cash-cow entirely wasted on anyone old enough to smoke, drink or vote.

$15 is a bargain compared to what scalpers were asking us to fork over so our little darlings could see their teen idol.

One's opinion of it may depend more on age and parental status than exposure to other rock-concert films. But there's no denying the film delivers on its promise.

What this concert film and documentary makes clear is that the real Miley is not just like her predominantly pre-adolescent, female fans.

"Both Worlds" doesn't really dig too deeply into why Cyrus has bloomed into a breakout star, but it proves to be the perfect vehicle for her fans.

Miley might not become another Britney, if she keeps away from those way-cute Jonas boys. They look like trouble. I think they've actually experienced hormones.

...possesses few elements designed to appeal to viewers over a certain age...

For the teenage girl target market, there is no question the film delivers as it alternates between onstage performances and backstage insights

I found myself imagining boardrooms full of people going over market research about exactly which lime-green sneaker/jean jacket combo will get the maximum pop-lust response from the fans and create the biggest marketing opportunity.

Not a fan of Hannah Montana and this movie. This 3D concert is funner to watch in 2D.

Not a fan, never watched the TV Series. First 3D movie i've seen and for a first it was pure excellence.

Not a life-changing cine-musical experience or anything...BUT IT ROCKED! Now, I know Miley Cyrus isn't the most talented teen performer out there but she just exudes this goofy fun-loving attitude that charms me to heck. I need to see her live! Didn't dig the backstage portions that much and Nick Jonas is seriously the only worthwhile Jo-Bro. Another drawback is that I paid an extra $2 to reserve tickets on Fandango only to be the sole screaming fangirl in the theatre. Fave songs: Start All Over, Girls Night Out, Rockstar, Let's Dance, If We Were A Movie