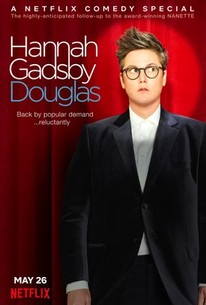 Emmy and Peabody award winning comedian Hannah Gadsby stopped the comedy world in its tracks with her genre bending show, Nanette. Having given herself her very own tough act to follow, she named her difficult second album after her eldest dog and took it for a walk across the planet, finishing up in Los Angeles and recording her second Netflix comedy special, Hannah Gadbsy: Douglas. You can expect your expectations to be set and met by Douglas: a tour from the dog park to the renaissance and back guided by one of comedy's most sparkling and surprising minds.

Gadsby is no everywoman, her worldview is entirely her own. That's why she stands out, at once fiercely and quietly, like a tiny, perfect lion.

This is an uneasy dance between artist and audience. It's challenging. It is funny, and truly hilarious at times. But it's also going to kick you in the guts when you least expect it

"Douglas" is a surprisingly slick, joke-dense show, running hot then cold and even chilly, periodically pausing to meditate on its changing temperature.

Douglas, while railing against the patriarchy and expounding on the blinkered social response to neurodivergence, also happens to be pretty fun.

Once again, Gadbsy has humanized and dignified a universal human experience that is too often misunderstood, misrepresented, or made invisible.

It's a well-constructed set, with a high hit-rate of jokes.

Expect something that's funnier than Nanette, still passionate but not quite as much so, and that lies undeniably in its shadow.

Hannah Gadsby is not everyone's cup of tea. But she was pretty damn funny to me. I'm also a sucker for puns, though, so maybe she knew I'd be watching.

She caps it all with a joke she told us she was going to tell - but delivers with the perfect timing that ends the show on a note of weird bliss.

For the masses that embraced her raw look at society, they will be treated to something that is unabashedly, bluntly hilarious.

Gadsby makes it an accessible show, even if it's intertwined with its predecessor.

Renaissance art plays a significant role in Douglas, proof that the Renaissance was unintentionally hilarious, and that Gadsby's closest companion on the comedy shelf is Eddie Izzard.

There are no featured reviews for Hannah Gadsby: Douglas at this time.