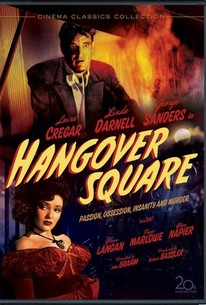 This nail-biting, grim crime thriller is the final film of talented young actor Laird Cregar, who had the potential of becoming a major Hollywood star had he not died shortly after filming. Set in a dark, foggy turn-of-the-century London, Laird plays an extraordinarily sensitive composer who becomes an enraged psychotic killer after hearing too many strident, harsh sounds. While in his maniacal, paranoid state, he horribly kills three people whom he believes double-crossed him. Meanwhile a Scotland Yard psychologist hastily tries to understand his ailment and see that justice is done. Cregar, who had spent most of his life weighing over 300 pounds decided that he wanted to cut a less cumbersome figure for this film and so began a stringent, severe diet. Sure enough, he lost 100 pounds in short order. His body could not handle the shock and shortly after undergoing surgery, he died.

Hangover Square is a short (77 minutes) but effective little noir film, not on the same level as The Lodger but with a few tense, memorable setpieces, a solid score.

A fable about monstrous artistry, dark and quivering

Laird Cregar's life may have been troubled and tragic but there's no denying his talent. Hangover Square works because Laird can seamlessly shift from charismatic leading man to ruthless killer and back again without the audience ever questioning the psychology or the motive. Good stuff.

a great little known gothic thriller with a pretty neat plot device: discordant sounds send a composer into a homicidal trance! with laird cregar, george sanders and linda darnell as the femme fatale. shot in gorgeous noir style with a wonderful score by bernard hermann

Atmospheric noir before noir came into being. Linda Darnell is breathtakingly beautiful even if her character is a grasping tramp.