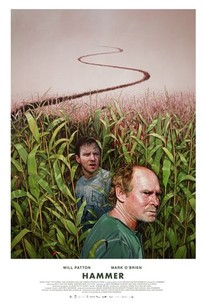 In a quiet border town Stephen Davis (Will Patton) is waiting at a stop light when his estranged son Chris (Mark O'Brien) speeds past on a dirt bike. Tracking him down Stephen discovers that Chris is on the run from a botched drug deal. He agrees to help him in an attempt to mend their relationship, but things quickly spiral out of control as a friend of Chris' goes missing and the vengeful drug dealer kidnaps someone they love. As the truth of Chris' activities comes to light, Stephen is forced to face his own failings as a father and must decide how far he is willing to go to protect a son he no longer recognizes.

Will Patton
as Stephen Davis

It's almost worth eating your own tail over.

A tense little thriller, a tight movie about someone who made a very bad decision and is now trying to fight his way out of it.

A throwback to the old-fashioned, lean and mean programmers that Hollywood used to pump out with regularity in the '40s and '50s.

[Hammer reminds] us that every family has baggage. It's just that in this case it happens to include two satchels stuffed full of cash.

One of my favorite movies I've seen lately, but there is no getting around that low budget...

I really liked the feel of it, but it's something much better to watch at home.

The film's excellent lead performances and artful execution distinguish it from comparable generic offerings, but what leaves the most striking impression is the emotional entry point that Sparkes finds into the story.

Hammer has the mechanics of a hard-edged noir thriller, which works startlingly well, but it's clear that Sparkes's heart, and therefore the film's, is centered on the distressed familial relationships.

There can be a lot to like about a straightforward thriller that shaves off all the fat it can.

I would watch Will Patton in anything but this film tested my limits.

There are no featured reviews for Hammer at this time.