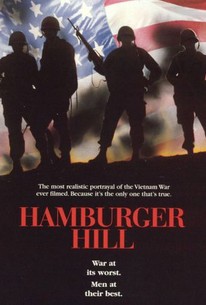 Though the anti-war sentiments of Hamburger Hill come through loud and clear, the film is squarely on the side of those courageous, much-maligned Americans who fought and died in Vietnam. Based on a true incident, the story takes place in 1969, as the 101st Airborne Division confronts the Vietcong in a bloody battle over Hill 937 (aka "Hamburger Hill") in the A Shau Valley. During the next ten days, both sides incur heavy losses, but the Cong refuse to surrender the hill. The ultimate American "victory" turns out to be a hollow one indeed. Scripted by Vietnam War vet Jim Carabatsos, Hamburger Hill not only underlines the futility of the war but also the pressures brought to bear upon the troops by an insensitive, often hostile media. By utilizing a cast of unknowns, director John Irvin deftly avoids the Hollywoodized slickness of such bigger-budgeted efforts as Apocalypse Now and The Deer Hunter.

Courtney B. Vance
as Doc

Irvin, who shot a documentary in Vietnam in 1969, the year the action takes place, makes fine use of the Philippines locations and the verisimilitude supplied by the production team.

There are a couple of rocky moments, but the large cast of unknowns go through hell convincingly, and illustrate the randomness of mortality.

A well-made Vietnam War film that narrows its attention to the men of a single platoon in a specific operation.

No matter what you think of the script, it's impossible to dismiss what's up on the screen.

This is a film about the futility of war expressed in the simplest terms.

Although it was underrated at the time of its release, time will eventually reveal that Hamburger Hill is one of the best and most realistic films made about the Vietnam War.

The most remarkable traits of this realistically detailed chronicle of a crucial, bloody Vietnam War combat is that it steers clear of Stallone's right-wing machismo in Rambo and of Oliver Stone's metaphorical meanings (good versus evil) in Platoon.

Serves as a grim reminder of what it was like for young men to live and die in the war in Vietnam.

Engaging War film set during the Vietnam War, Hamburger Hill chronicles the battle of the same name, and it's a film that I view almost as a forgotten Vietnam War film because, when people talk about great Vietnam War films, they mention Apocalypse Now, Platoon and Full Metal Jacket, but they don't mention this film. However for what it is, it's a standout feature, one that delivers some tense war carnage, and has some impressive performances from its cast. The action is riveting, and the performances compliment that perfectly. Hamburger Hill is a near perfect war picture that deserves to be rediscovered by fans of the genre. Hamburger Hill is an exciting picture and with terrific storytelling and wonderful performances from its cast, it should be ranked as one of the best of the Vietnam War films. The Strength of the film lies in its characters, and with that, it makes the film standout among other Vietnam War films. This is a very good picture, one that has enough character development to compliment the action. The script is well written as well, and it captures the chaos of war perfectly. Hamburger Hill has few flaws, and you can forget its weak aspects. I think this film is much underrated and it doesn't deserve the flack it has received. For what it is, it's an engaging war film that will entertain you from start to finish and it's one of those forgotten gems of war films because it has often been overshadowed by the most well known Vietnam War films. Hamburger Hill is a worthwhile picture to watch, one that is far better than what some critics have said, with a great cast, well written script, this is a picture that will surely satisfy the most demanding genre fan.

Vietnam has been done a lot better than this. Tha acting and writing for this movie was horrible and made for some pretty lousy characters. Platoon, Apocalypse Now, and Full Metal Jacket all had great acting and writing and that's why they stand high above this movie in effectiveness. Don Cheadle has a role in this movie and thank God for that. Although he has a smaller role than others in the movie, he clearly has the only good acting in this movie. It's realistic, but frankly I could care less because of the characters.

So awful. Goes on the list of bad war movies along with thin red line and tears of the sun. It tried so hard to have a moving message that I couldn't stand to watch. Ernie Hudson's presence is the only redeming part.

"It don't mean nothin'" is the characters' refrain in this film, and the main characteristic that makes this film worth watching. An honest-to-goodness war pic in the spirit of classics like The Longest Day, the campaign to take Hill 937 is memorialized in this film by the name the troops bestowed upon it: Hamburger Hill. Though it was the late 80s, and while this film has some elements that suggest that it might have been at least partially directed at the Iron Eagle/Steven Seagal demographic, a much more important target audience for this film is probably veterans of the Vietnam War who, like those who watched (e.g., again) The Longest Day, were given the opportunity to see their own experience of a battle and a platoon dissected and re-created on the big screen... a basically true Vietnam War story among the thousands filmmakers have been scared to tell, minus the soapboxing of Oliver Stone, Stanley Kubrick and others. (Not to take anything away from Platoon, Born on the Fourth of July and Full Metal Jacket.) Hamburger Hill is a loyal film - opening with the Vietnam memorial and closing with a dedication to those lost in this battle and the war as a whole - and it's a portrayal not necessarily of the war, but of the people in the war. In one sense, I couldn't care much about the characters, because there are so many and they aren't very developed, but in another sense, the device works: in a platoon and war such as this one, a soldier doesn't really get to know his (her) peers so well - re-assignments and casualties very quickly get in the way. Some bonds do form, though, and Dylan McDermott (who, until now, I never liked in The Practice or anything else) played the role of the Sergeant very well, displaying his compassion for his men, and his understanding of the aspects of all of their personalities. (The film also features an early performance by Don Cheadle, and one of my favourite sitcom actors of all-time, Brian from Wings, Steven Weber.) Protest, race relations, bureaucracy and media sensationalism are all in the background, but while some may call the portrayal of these aspects of the war dismissive, I concur with the soldiers' opinion that the film presents: it don't mean nothin'. This is a film about the experience of a group of men fighting together, and probably more for each other than for any of the supposedly noble goals of God or country or apple pie or communist containment, or whatever the hell that war was about. Real men went, and real men died, and this is a film that doesn't lack in realism in making its point. Some parts could have been better - for the last 10 minutes everyone is wearing way too much eyeliner, for example - but at the risk of over-intellectualizing a simple war movie, I'm going to say it: I truly think that this is a misunderstood film, and one too often overlooked in the Vietnam canon.