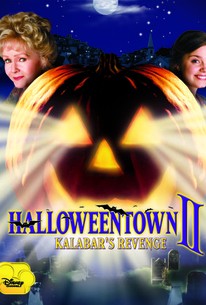 Witches are on the warpath in this sequel to the original hit movie about Marnie, a girl who learns on her 13th birthday that she comes from a family of witches. Debbie Reynolds again stars as Marnie's grandmother Aggie, as the family returns to its native Halloweentown to find that all the magic seems to have gone. It seems that Aggie's spell book has been stolen by an angry warlock, who's going to turn every human into whatever creature's costume they are wearing at midnight on Halloween.

Concoction of magical fun and fright for tweens.

Much darker and focused on narrative with the battle of good and evil and carrying on the storyline...

Yes, it's a Halloween movie - good background noise while carving pumpkins maybe, but not much more.