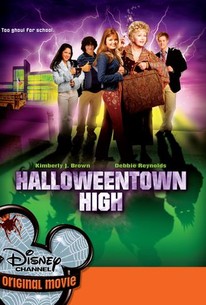 Marnie and her friends from Halloweentown are back in this made-for-cable feature. Marnie (Kimberly J. Brown) is a teenage witch living with her family of supernatural beings in the village of Halloweentown. Marnie and her pals are interested in attending high school in the nearby mortal community, where they'll be able to spend more time with kids their age, and with the help of her grandmother Aggie (Debbie Reynolds), she's able to convince the town council to go along with the suggestion. However, there's a catch -- if anything dangerous happens as a result of their presence in the mortal school, Marnie and her friends will lose their magical talents. Trouble does make its way to the school, but not in a way anyone expected -- the Knight of the Iron Dagger comes to the mortal world determined to wipe out Marnie and her magical companions. Halloweentown High is the third film in the Disney Channel series that also includes Halloweentown and Halloweentown II: Kalabar's Revenge.

With its lack of the actual town, key characters, plot holes, and some truly annoying PSA's shoved down our throats, I'm not in any rush to see this ever again...

Halloweentown High suffers from trying to keep the friendly version of Halloween (with vegetarian werewolves and other nice "scary" creatures).

Weaker than the previous films.

Cute, although not my favorite. Watched with my niece.