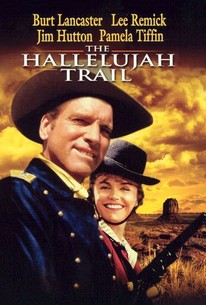 Lancaster and a fine cast are wasted in this comedy about a man assigned to protect a liquor shipment crossing the Great Plains. His foes are native tribes eager to get the liquor and a women's temperance organization eager to stop it. Much of the humor is telegraphed when not outright predictable. The film concerns itself with neither history nor geography, even inventing a nonexistent mountain range between Kansas City and Denver. This sprawling misfire from the mid-sixties was an early sign that the genre was wearing out.

Karla Most
as Mary Ann

Carroll Henry
as `A' Company Sgt.

Critic Reviews for The Hallelujah Trail

Hung out to dry with nowhere to go but in quicksand.

Audience Reviews for The Hallelujah Trail

Satirical and funny! I'd become so accustomed to Burt Lancaster in serious dramatic roles that his brilliantly subtle humor took me by surprise. *NOTE: Watch for a very thin Donald Pleasence as the prognosticating 'Oracle'.