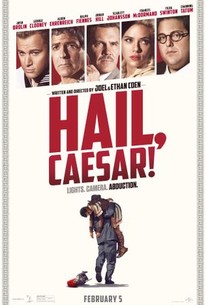 Timm Perry
as Stage 8 Man at the Door

Noel Conlon
as Scotty at the Gate

Clancy Brown
as Gracchus (In The Epic, "Hail, Caesar!")

Jacob Witkin
as Saul of Tarsus

Jack Huston
as Cad in Cab

Agyness Deyn
as Woman in Cab

Tyler Hanes
as Dancer
View All

Think of Altman's The Player; mix it with random pages of Fitzgerald's The Last Tycoon; shake and serve.

It's not encumbered with significance, but richly affectionate and very entertaining. Hail, Caesar! is something to be greeted as a gorgeous exercise in style.

Every new scene is a surprising delight in what, at the time, appearing as a sunny, screwball satire pinpointing the moment where the Hollywood production line was starting to clank and creak.

Their latest, Hail, Caesar!, is their giddiest comedy to date, but it's also hit-and-miss within itself.

Hail, Caesar! may not go down as one of the best Coen Brothers movie, but even less than their best is still better than damn near every other offering out there.

A satirical comedy of the old Hollywood that tries to fly, but with the slightest difference that it never takes off. [Full review in Spanish]

I didn't know what it was.

I kept being like, "wait, this is a Coen brothers movie?"

Hail, Caesar! is a love letter to old Hollywood that is equally effective as a send up.

Come for Ralph Fiennes trying to coach a hopeless Alden Ehrenreich in the art of saying "Would that it were so simple" and stay for Channing Tatum hamming it up with a fluffy pooch!

An affectionate look back in the last days of the studio system in Hollywood, with Josh Brolin as a studio head doggedly riding herd over over a loose assortment of nuts and fruitcakes. Trying to guess which of the classic stars the modern stars are standing in for is one of the perks of the film, notwithstanding the considerable differences between the public personas we expect versus the unsettling private personas revealed. A minor bit of Coen Brothers fun.

Few directors have a track record as hit and miss as the Coen brothers. For every masterpiece they also deliver a real stinker. This one is probably supposed to be a mockery of the vanity during Hollywood's Golden Age. Considering all the acting talent combined here it's a gigantic shame how little the script has to offer. The plot would fit on a stamp but is dragged out by pointless scenes, encounters and musical numbers. There is no punch line, no twist, no real resolution. The Coen's probably found that hilarious, there have been films where this worked in their favor. This is not one of them.

We see a fictionalized day in the life of famed MGM fixer, Eddie Mannix, in a whizbang of an enjoyable ride that gets pretty inscrutable by the end, until you realize (or research online) that the movie is a veiled biblical parable in the vein of the Coen Brothers' other odyssey films: "O Brother, Where Art Thou," "A Serious Man," and "Inside Llewyn Davis." Mannix is God, shepherding his flock away from communist writers, tabloid scandalmongers, and tyrannical directors. The film is a bit oblique in the Coen Brothers way, but it's not without that Golden Age of Hollywood shine. The cast of Coen vets and novices perform commendably, especially Tilda Swinton as imperious and flinty twin gossip columnists. I wasn't too impressed with Channing Tatum's attempt at classic song-and-dance man, Burt Gurney, a homoerotic send-up of stage and screen hoofer Gene Kelly. Tatum's hip-hop shoulders are too popped and locked instead of broad and back for the tap number. Burt's traitorous flight and the lost briefcase are also strange McGuffins. Best of all is newly-light sabered Alden Ehrenreich who steals the show as shucksidoodles Hobie Doyle, an oater player picked to portray a well-spoken, debonair gentleman. The scene of persnickety Ralph Fiennes trying to smooth out Hobie's drawl is hilarious and uncomfortable, but Hobie's payoff is suave perfection. Ehrenreich and Veronica Osorio are also just charming as heck on Hobie and Carlotta's arranged date. An unfortunate little factoid I learned is that Ehrenreich's singing voice was dubbed. I is disappoint.