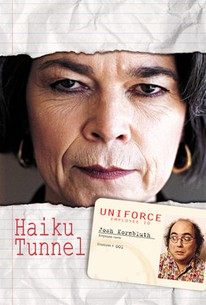 A temp worker is promoted to permanent status and finds his whole world changing as a result in this satiric comedy. Josh (Josh Kornbluth) is an overstuffed aspiring writer who is trying to finish his first novel, but in the meantime he supports himself by working as an office temp. Josh has grown accustomed to the Byzantine world of temporary labor, particularly the bossy secretaries and chilly co-workers, but Josh manages to impress his latest employers enough that they offer to make him a permanent, full-time employee. While a fellow temp who worked for the same company warns Josh that taking the job would be a mistake, Josh takes the plunge anyway, and soon discovers that his fellow employees now embrace him as one of their own. He also discovers that Bob Shelby (Warren Keith), his new boss, is more than a little crazy, and when Bob gives Josh an assignment to mail a series of important letters, John finds that he's suddenly incapable of doing this seemingly simple task. Instead, Josh spends his days working on his book (on company time and on a company computer), with his fellow office drones offering emphatic encouragement. Josh Kornbluth adapted Haiku Tunnel (with the help of John Bellucci and Jacob Kornbluth) from a semi-improvised one-man show Kornbluth created with David Ford; the Kornbluth brothers also directed the film.

Josh Kornbluth
as Himself

Jacob Kornbluth
as Temp No. 2

Jennifer Laske
as Helen the Ex-Girlfriend

Leah Alperin
as Temp No. 1

Stephen Muller
as Temp No. 3

Linda Norton
as Temp No. 4

Patricia Scanlon
as Helen the Ex-Secretary

Jodean Lawrence
as Denise the Receptionist

Todd Hickey
as Protester
View All

In their low-budget, indie-film way, the Kornbluth brothers have come up with a modest, modern-day equivalent of How to Succeed in Business Without Really Trying.

Kornbluth is funny, but not funny enough to carry his feature comedy.

Josh becomes increasingly distraught and depressed, but not nearly as much as the poor people watching the movie.

As 'Josh's' story wears on, so does one's patience.

Kornbluth, with his softly discombobulated rage, makes you want to see more of him.

Not badly done, but overshadowed by the superior (and better funded) Office Space

A bit of an ego-trip, but an entertaining one.

No Japanese poetry or actual tunnels were used in the making of this film, [just] some pretty clever writing and directing

There's just not enough of a story for this to be a feature film.

There are far too many stretches where Josh is simply carried away with being Josh, and we are not particularly amused.

Some people really loved it, I thought it was just okay.

[font=Arial][color=darkred]Josh Kornbluth plays Josh Kornbluth, super temp in the world of office politics and incompetent corporate superiors. He's a working man's hero (well, a secretary's hero) as a round ball of puffy passive-aggressive professionalism. When asked to go permanent for a tax attorney ("We'll even cover your… psychotherapy") is when Josh's world begins to enter into comedic haywire. He's more adept at creatively finding ways around work then at actually accomplishing it. Kornbluth is a terrific comedic and a truly memorable figure. He co-wrote and co-directed the film with his brother from their stage play. 'Haiku Tunnel' often channels the spirit of the wicked satire 'Office Space' (a film that only gets funnier every time I watch it), but has enough of a feel all its own to be distinguishable. The film has some great lines and some imaginative characters to boot. 'Haiku Tunnel' is witty and often times hilarious, not to mention dead-on with its precision like satiric strikes. Kornbluth is a definite entertainment find and 'Haiku Tunnel' is a gem of a film worth looking for.[/color][/font] [font=Arial][color=darkred]Nate's Grade: B+[/color][/font]