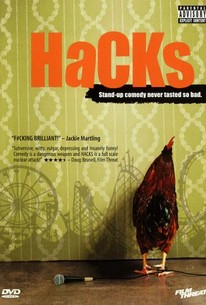 [R]efreshingly aggressive and offensive... to say 'it lacks a sense of political correctness' would be a massive understatement...

...there's no denying that Hacks is one of the funniest movies to come along in a long while.

There are no featured audience reviews yet. Click the link below to see what others say about Hacks!