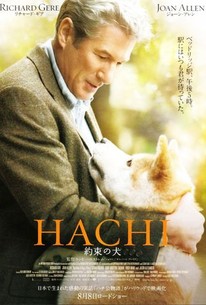 Based on the 1987 Japanese film Hachiko Monogatari, as well as on a true story, Hachi: A Dog's Tale stars Richard Gere as a college professor who finds an abandoned dog and takes the poor lost animal in. The film follows the two as the man and animal soon form a strong and unexplainable bond. Joan Allen co-stars in the Inferno Entertainment production. ~ Cammila Albertson, Rovi

Robbie Sublett
as Michael
View All

Itâ(TM)s an extraordinary and touching story but told with too beady an eye on the box-office for comfort - even if youâ(TM)re a doggy person.

This is mutt mush, pure and simple-minded, for those in the mood.

The man who once directed What's Eating Gilbert Grape? is now the Hallmark greeting card of movie-makers.

There's not a whole lot going on, it's pretty much just this relationship,between this dog and this man and it's really touching and and beautiful.

We all know Marley & Me is the Citizen Kane of dog movies that can drain all tear ducts. However, this one (also based on a true story) runs an honest, heartbreaking second.

Dramatic story of a dog's devotion is emotionally intense.

An unapologetic tear-jerker. You might resent being emotionally manipulated by this film, but I challenge even the most hard-hearted moviegoer not to spill some saltwater while watching it.

An immensely appealing drama about the extraordinary love and devotion of a dog for his beloved human companion.

This is the film equivalent of Nice biscuits, or snow globes, or N-Dubz. You're vaguely aware that they exist but you don't know anyone who actually likes them.

Robbie Collin
News of the World
View All Critic Reviews (28)

Actually better than I expected. I don't really like Richard Gere, and Joan Allen's pillow face was distracting, but the dog is a real star and directed in a way that made you see through his eyes. Was very sad at the end, though.

A great family film but real tear jerker. If your a animal lover or have a dog you will cry your eyes out on this movie. About a dog who is faithful to his master even after his death. A must see, no tissues, you will need paper towels. 5 Stars

This wonderful family film is one of the most treasured and heartwarming true stories ever told. In this story grows deeper, a beautiful friendship of a dog and his master unfolds embodying the true spirt of family and loyalty, while inspiring the hearts of an entire town. Beautifully shot and edited. At the end of the movie, I was in tears absolutely broken down crying my eyes out because I really love dogs. Richard Gere makes fantastic performance, he bonds really well with the dog and it never feel like watching an actor at all - it genuinely seems to be a movie with his own dog! This film generally adheres to the actual true story of a golden brown Akita dog in Japan in 1924. Highly recommendation! Remade of Japanese's 1987 movie, Hachiko Monogatari (aka The Tale of Hachiko).

Very sad and touching story. It makes me proud to be a Swede whenever Lasse Hallström makes a movie of such beauty and high quality. But it's not just the directing and plot that's great, but also the acting in general. Richard Gere brings a really warm and heartfelt performance to the screen, and his bonding with the dog Hachiko is very authentic in its essence. The fact that it's based on a true story made it even more affecting. It's not often a movie makes me cry, but this one had me in tears during its last half hour. Anyone who is a dog lover ought to see and enjoy this wonderful film.