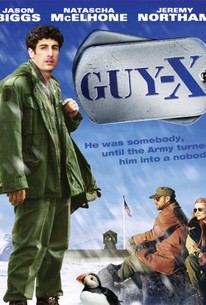 This loose update of John Griesemer's biting and satirical 2001 anti-war novel No One Thinks of Greenland features American Pie starrer Jason Biggs as Corporal Rudy Spruance, a young man enlisted in the U.S. military in the late 1970s, at the height of the Cold War between the States and the Soviet Union. Though he's supposed to be transferred to Hawaii, Rudy is instead thrown out of a plane on a quasi-vacant airstrip in an unspecified location. He hits his head, loses consciousness, and comes to in a local infirmary - only to have doctors inform him that: A) He isn't in Hawaii, he's on a military base in icy Greenland, and B) His name isn't Rudy Spruance, it is Martin Pederson. The bombastic, ignorant base commander, Corporal Lane Woolwrap (Jeremy Northam) dismisses Rudy's assertions of mistaken identity and hands him his mission: to start a propagandistic newspaper used to generate morale among the troops. Instead of doing this, Rudy happens upon an isolated, top-secret building that houses some long-kept secrets related to government malfeasance - well aware of the implications of his discovery. Natascha McElhone co-stars as Woolwrap's girlfriend.

A movie that doesn't know whether it is slapstick comedy, satire, mystery or a schlock horror flick. Whatever it is, it is highly derivative, and of little consequence.

A jack of all formulas and master of none.

A film which lingers and haunts, but never compels.

A political black comedy without the bite of the classic military satires it tries to emulate.

Metzstein deserves considerable praise for what is, for all its flaws, something quite unique, odd, and memorable.

"Guy X" wins the prize for most boring, pointless and disappointing war movie of the year.

Guy X could be the weirdest failure of the year. It's also not for anyone prone to soft-tissue neck injury, so abruptly does it switch gears from one movie to another.

Jason Biggs (doomed to have some variation of the words 'pie-botherer' in every article ever written about him thanks to the American Pie movies) makes a successful leap from comedy to drama here.

While there's an enjoyable subversive atmosphere, the story simply isn't sharp enough to mean much of anything

Brilliantly told and will remain with you as you leave the theatre.

This film probably would have been a lot better if it could make up it's mind as to exactly what it is: one minute it's trying to be Buffalo Soldiers, the next some Military thriller involving something that's never actually explained. And as the film doesn't take either of these seriously it fails on both accounts.

Strange, but altogether intriguing. The story of a soldier transferred to Greenland instead of Hawaii and the impossibility of escape. When I saw Jason Biggs, I didn't expect much but he wasn't too bad in here. Sure, the movie itself is based upon a book I suspect that is aimed at mocking the whole idea of transfer errors. There, in Greenland is base Quarratanga [sp?] - pretty much somewhere where soldiers go 'cause they've screwed up too many times to simply useless. Up there, they load and unload cargo that flies there every once in a while. When, set soldier [Biggs] accidentally walks into a terrible secret...then things start to get really interesting. Sarcastic at times, gritty and possibly miserable at others. A bizarre film, no doubt...because you'd expect nothing to happen and yet it does.