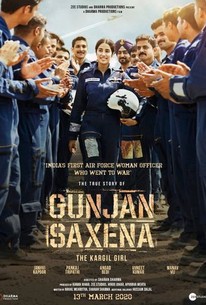 In 1999, India's first woman combat aviator went all guns blazing into the heart of the war zone in Kargil and rescued injured soldiers in an unarmed helicopter, this is her story -- Flight Lieutenant Gunjan Saxena. At a very young age Gunjan discovered her passion for flying. This film follows her journey as she chases her dream with focus and determination and deals with the obstacles and challenges that were thrown her way. As a part of the first batch of female Indian Air Force pilots, she was constantly tested and had to repeatedly prove her flying skills and physical toughness. However, with her undying spirit and the support and guidance of her family, she was able to overcome all odds and finally rise above them to live her dream and serve her nation.

There are no critic reviews yet for Gunjan Saxena: The Kargil Girl. Keep checking Rotten Tomatoes for updates!

There are no featured reviews for Gunjan Saxena: The Kargil Girl at this time.