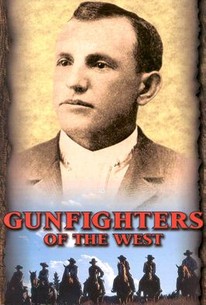 This film traces the story of Tom Horn, who went from being a respected lawman to a hired killer, ultimately dying in the gallows for his crimes. Born in Missouri in 1860, Horn set out west, where he became a scout in the Indian Wars. He was accorded fame by negotiating a settlement with Geronimo. His stature grew to legendary proportions when he captured "Peg Leg" Wilson. As an agent for Pinkerton, Horn killed 17 men, then quit, saying he did not have the stomach for it anymore. But then in a strange twist of fate, he became a hired gunman, feared and hated for the way he ambushed and killed cattle rustlers. While his gun was for hire, he mistook a 14-year old son for his father. His execution of the boy resulted in his own hanging. Period imagery and reenactments tell the story.

Critic Reviews for Gunfighters of the West

There are no critic reviews yet for Gunfighters of the West. Keep checking Rotten Tomatoes for updates!

There are no featured reviews for Gunfighters of the West at this time.

Gunfighters of the West Quotes