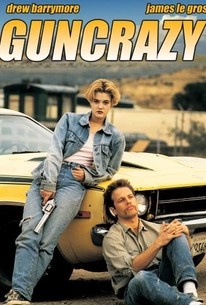 Not so much a remake of Joseph H. Lewis's 1949 film noir classic as a variation on its themes, Guncrazy stars Drew Barrymore as Anita, a teenage girl who was born in a trailer park on the wrong side of the tracks and has been fighting a losing battle with respectability ever since. Anita was abused sexually by her mother's boyfriend (played by onetime Warhol "superstar" Joe Dallesandro), is the subject of lewd advances by the school bullies, and is looked on as a slut and a loser by her peers. When Anita has to find a pen pal for a class assignment, she ends up corresponding with a prisoner named Howard (James LeGros), who's serving time for manslaughter. Howard is one of the first people to address Anita with tenderness and respect, so when he gets parole, Howard moves in with her. Howard's obsessive love of guns, however, once again leads to violence, and the couple hits the road hoping to escape their fates. The debut film from director Tamra Davis, Guncrazy was originally shown on cable television, but received enough critical acclaim to merit a later theatrical release.

Tom Smith-Alden
as Parole Officer No. 1

Wheaton James
as Parole Officer No. 2

Ray Bickel
as Officer with Bullhorn

Jaid Barrymore
as Woman with Dog

Paul Janossy
as Man at Mall

Billy Bates
as Officer at Fountain

Rowena Guinness
as Ruby the Prostitute

Ray Bickle
as Officer with Bullhorn

This loose remake of Joseph H. Lewi classic assumes the shape of an exploitation B-picture, but it has some merits, including Drew Barrymore's performance.

Doesn't even touch the original classic, but still edgy.

Original rating of 4 stars still holds after a 2017 rewatch. Loved this movie when I first saw it in the 90's. Yes, it is a bit dark and nasty, and was probably straight to VHS at the time, but Drew is fantastic here. She really makes Anita sympathetic as an isolated young girl with a horrible home life who makes a bad choice.

I loved this movie when I saw it on TV a few years ago, but then I saw similar movies that were way better than this one. Well, at least this one has an awesome performance from Drew Barrymore. It's like a teenage version of a Bonnie and Clyde type story. I'd like to watch it again sometime.

This little Bonnie and Clyde imitation is rather cheap, tawdry, and nearly unpredictable. It needed a lot of improving, and more character to the story.