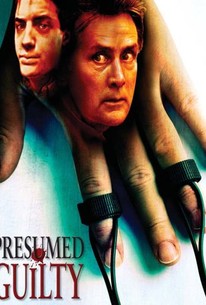 Guilty Until Proven Innocent is a TV-movie dramatization of a an actual miscarriage of justice. Young Bobby McLaughlin (Brendan Fraser) is accused of murder when a teenager is killed during a Brooklyn drug deal. The arresting cop knows that Bobby didn't do it, but is so eager for a conviction in this otherwise unsolvable crime that he strongarms an eyewitness into fingering Bobby. The boy's foster father Martin Sheen is assured by the defense attorney that the truth will out in court. When Bobby is convicted, Sheen continues through legal channels to secure the boy's release, confident that someone will be willing to open their eyes to the facts. But despite common knowledge that he is innocent, Bobby languishes for years in prison. Featured in the cast of Guilty Until Proven Innocent is Martin Sheen's daughter Renee Estevez.

There are no critic reviews yet for Guilty Until Proven Innocent. Keep checking Rotten Tomatoes for updates!

There are no featured audience reviews yet. Click the link below to see what others say about Guilty Until Proven Innocent!