Guess Who's Coming to Dinner1967 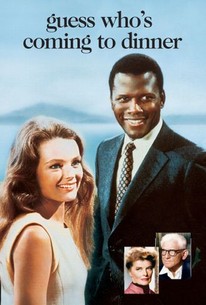 Critics Consensus: More well-intentioned than insightful in its approach to interracial marriage, Guess Who's Coming to Dinner succeeds thanks to the fizzy chemistry of its star-studded ensemble.

Critics Consensus: More well-intentioned than insightful in its approach to interracial marriage, Guess Who's Coming to Dinner succeeds thanks to the fizzy chemistry of its star-studded ensemble.

Critic Consensus: More well-intentioned than insightful in its approach to interracial marriage, Guess Who's Coming to Dinner succeeds thanks to the fizzy chemistry of its star-studded ensemble.

Guess Who's Coming to Dinner Videos

Guess Who's Coming to Dinner Photos

Old-line liberals Matt and Christina Drayton (Spencer Tracy and Katharine Hepburn) have raised their daughter Joey (Katharine Houghton) to think for herself and not blindly conform to the conventional. Still, they aren't prepared for the shock when she returns home from a vacation with a new fiancé: African-American doctor John Prentice (Sidney Poitier). While they come to grips with whatever prejudices they might still harbor, the younger folks must also contend with John's parents (Roy Glenn Sr. and Beah Richards), who are dead-set against the union. To complicate matters, the older couple's disapproving maid (Isabel Sanford) and Christina's bigoted business associate (Virginia Christine) put in their two cents' worth. While Joey is determined to go ahead with the wedding no matter what people think, John refuses to consider marriage until he receives the unqualified approval of all concerned. The closing monologue delivered by Spencer Tracy turned out to be the last scene ever played by the veteran film luminary, who died not long after the production. The film was a success in the racially volatile year of 1967 and was nominated for 10 Academy Awards, including Best Picture, and won for Hepburn and screenwriter William Rose.

News & Interviews for Guess Who's Coming to Dinner

View All Guess Who's Coming to Dinner News

Critic Reviews for Guess Who's Coming to Dinner

The movie insidiously charms us into ignoring its defects, and for this the credit must go to a superb cast.

A disaster on all counts -- its time, if it ever had one, has definitely passed.

A wishy-washy, sanctimonious plea for tolerance, directed with Kramer's customary verbosity and stodginess.

A most delightfully acted and gracefully entertaining film.

It would be easy to tear the plot to shreds and catch Kramer in the act of copping out. But why? On its own terms, this film is a joy to see, an evening of superb entertainment.

Since Stanley Kramer's direction doesn't help much to resolve their dilemma, the actors are left looking wooden and uneasy. (The glorious exception is Spencer Tracy).

Guess Who's Coming to Dinner toes the line between thoughtful, responsible social commentary and didactic messaging; their contents reflect a genuine national uncertainty...

The film may feel somewhat dated, but the performances and the emotional and socially biting material remain spot on - maybe even more so now.

...most notable for being a metatextual commentary on the onscreen/offscreen romance of Tracy and Hepburn.

The film may have a foregone conclusion, but it's worth watching as the acting is so good.

Initially breezy without ever sacrificing any of its points, the picture eventually resorts to a series of static speeches. Luckily, the actors carry the day, particularly Sidney Poitier, Cecil Kellaway and, taking MVP honors, Spencer Tracy.

Audience Reviews for Guess Who's Coming to Dinner

A remarkable drama considering its important subject for the time it came out, and it works very well despite a few discrepancies in tone, like a silly ice cream scene that plays for cheap laughs. But it is Hepburn and Tracy who bring it to a higher level with wonderful performances.

Representing the swan song of Spencer Tracy and solidifying Sidney Poitier's resume, Guess Who's Coming To Dinner is an examination of the changes going on during the mid to late 1960's. The film has a very basic premise in which young Joey (Katherine Houghton) comes home from a trip to Hawaii with John Prentice (Poitier) to meet her parents (Tracy and Katherine Hepburn). What follows is the conflicted feelings that go along with the changing times of the 1960's. John will not marry Joey without the consent of her parents. Her parents are unsure about giving consent, not due to their own racism, but due to the fear of how difficult their life will be as an interracial couple. Added in are the two cents of everyone around the family. True, this can be a comedy at times, but it's more a look at the old guard facing the new guard. Directed by the legendary Stanley Kramer, the film represents a kind of social experiment. Let's drop '60's progressivism on the nuclear family of the 1950's (although the privileged life of the Drayton's is far from nuclear). The Drayton's are not conservative minded individuals, but very left leaning. Still, they fear for their daughter and how that current state of the world would react to them. Tracy delivers his final performance with a flourish and considering his death was imminent brings even greater power to his role. Add to the fact that this is one final pairing with Katherine Hepburn makes it even more bitter sweet. Hepburn also mesmerizes on the screen as the mother giddy over her daughter's upcoming nuptials, yet fearful at the same time. Once again Poitier proves that he is one of the greatest actors of this era, a witty and likeable presence that thinks things out for the protection of others. The only real negative of the film is Houghton's performance as Joey, which comes across as very snotty and annoying. Whether it was written this way or not, you can almost feel like maybe John would be better of with not being tied to her in some instances. I asked myself a question while watching this film. Have we moved forward in the last half century compared to our ideals? In some ways we have. Interracial marriage is not illegal in seven states, as the film reminds us. There's very little stigma related to it anymore, other than the old school and uneducated. The thing is that it feels like where we have progressed as a society, we're still slipping in other areas. To avoid making this review an ideology discussion I'll stop there. Guess Who's Coming To Dinner is a time capsule of the '60's and represents one of the greatest psychological battles of all time. When your ideals come home how are you going to react?

Pontificating, pretentious film. It's so fantasy it's crazy.

Cast: Spencer Tracy, Katharine Hepburn, Sidney Poitier, Katharine Houghton, Cecil Kellaway, Beah Richards, Isabel Sanford, Roy Glenn, Virginia Christine Director: Stanley Kramer Summary: Spencer Tracy and Katharine Hepburn star as wealthy Californians who consider themselves progressive until their only daughter (Katharine Houghton) brings home her African American fiancé (Sidney Poitier) in this snapshot of race relations in the late 1960s. The film earned two Academy Awards (for Hepburn's performance and William Rose's screenplay) and eight other nominations. My Thoughts: "I can't imagine what it must have been like when this film came out in 1967. How controversial it must have been to see a black man and a white woman in a relationship and going to be married. It of course isn't such a big deal in today's world. But for some, still an issue. It's a smartly written film with such great acting. I loved Spencer Tracy as the father and Cecil Kellaway, who was quite funny as the Monsignor. I'm sure it made people think, talk about it more, and changed peoples views. My mother said the movie was a very big deal when it came out. That some people were outraged and disgusted while other's where impressed and celebrated the film in hopes of changing some persons views. The ending speech that Spencer Tracy gives near the end of the film is moving. Kudos to everyone who was apart in making this, which I am sure was a ground breaking film in that time."

Guess Who's Coming to Dinner Quotes