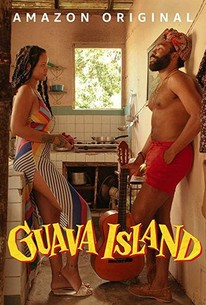 On Guava Island, a local musician is determined to throw a festival for everyone to enjoy. A tropical thriller starring Donald Glover and Rihanna.

"Guava Island" is a nice enough place to visit, but an hour there is more than enough.

Glover and Murai assemble a magnetic cast who are, quite simply, a joy to watch.

For all of Glover's substantial achievements, [Guava Island] is shockingly facile and utterly limited in perspective.

Its message is noble, its vistas handsome and vibrant. But the film doesn't quite meet the exceptionally high bar Glover has set for himself.

In many ways, Guava Island accomplishes exactly what it set out: create a fun, colorful, anti-capitalist romp that leaves viewers smiling.

Guava Island is a great first push into feature work, from the team that brings us the show Atlanta, and it whets the appetite for more film work from all of them.

In just under an hour we get a tight and surprisingly dark plot with a powerful message about the evils of capitalism, charismatic performances from all involved, and some pleasing visuals of the island.

It is easy to say that even though it's a casually charming collective of ferociously stiched notes, the overall experience that you get out of this half-baked allegory is also half-amusing.

Guava Island's most damning sin is that it's unconvincing -- both aesthetically and in its assertion of Deni as a selfless, romantic, revolutionary hero.

I have been a fan of Donal Glover since his breakouts either with his unique turn in music or his acting debut in the television show Community. For these reasons alone, I'll pretty much watch anything that he has been attached to star in. Guava Island is one of Amazon Prime's most recent releases and while it teeters between being a feature film and a short film, I will consider it a feature, since the standard is usually 50 minutes. Clocking in at 55 minutes, this is a very breezy watch, which easily has me recommending this enjoyable flick. Set on Guava Island and following Deni (Donald Glover) as he is set on performing the largest festival the island has ever seen, complications arise and turns the overall premise of the movie into a brief thriller when the climax kicks into gear. Being as short as it is, it's hard to not ruin the ending of this film, but if you have seen the music video This is America by Childish Gambino (Donald Glover), this film is pretty much an extended version of that concept, even down to a performance of the song. This film definitely sets out to make a statement and I believe it does so in an emotional, yet fun way. Donald Glover and Rihanna have some very enjoyable chemistry here, be it ever so brief. There were multiple occasions where I could feel the movie would soon conclude, as it sets up many threads and ties them up quickly. This was my main complaint with the film because it really did have the potential to be 30-40 minutes longer. This is the type of movie that, with the right marketing tactic, could have been a giant movie at the box office, due to the fact that it would have started a large conversation. In the end, Guava Island is a very well-made, short feature film that goes all-in on its messages and delivers throughout the climax of the story. Normally, I wouldn't recommend a movie that exists solely to make a statement, but because everyone in the film is very likeable and the music throughout is worth listening to, I can absolutely give this one a recommendation. Guava Island isn't a movie that I would put above the rest of this year's releases, but it's an easy watch for many viewers. Solid entertainment with an impactful ending.