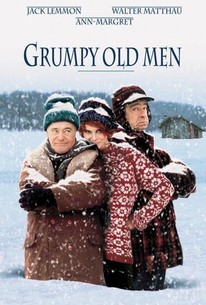 This cheerful holiday comedy, a surprise box office smash, featured a generous dollop of raunchy, crude humor and was greatly elevated by the presence of masterful performers in the lead roles. Jack Lemmon is John Gustafson, an ice-fishing Minnesota native who has been feuding with his neighbor and former best friend Max Goldman (Walter Matthau) for decades. The battle of wills between John and Max is characterized by crude name calling and harmless practical jokes. Max is unaware that John is having serious problems, chiefly that his daughter Melanie (Daryl Hannah) is experiencing marital woes and that his house is about to be confiscated by an officious IRS agent (Buck Henry). When it seems that John and Max may finally put aside their childish rivalry, however, sexy new neighbor Ariel (Ann-Margret) arrives and dates both men, pitting them against each other more fiercely than ever before. Despite their mutual loathing, the death of a friend, John's problems, and a budding romance between Max's son Jacob (Kevin Pollak) and Melanie may force the two old friends to reconcile. ~ Karl Williams, Rovi

In their prime, the by-play of these two (Lemmon and Matthau) was like an entertainingly bad marriage, but time has made their antagonism seem perfunctory, and the rapport that underlies it somehow smug.

Walter Matthau and Jack Lemmon are awfully good at this sort of thing.

Just don't expect their bickering to be on the level of Neil Simon, and you won't be disappointed.

If you poke through Grumpy's cheap sentimentality, you'll find a worthy picture somewhere.

The movie is too pat and practiced to really be convincing, and the progress of Ariel's relationships with the two grumps seems dictated mostly by the needs of the screenplay.

Whether Grumpy Old Men will bring out the ornery elderly population is anybody's guess. But young and old alike may find something to like here.

Where Lemmon begs for our approval, Matthau barely bothers to perform. An odd couple indeed.

the real reason this movie works is the fantastic, decades-honed chemistry of Jack Lemmon and Walter Matthau

A funny, often hilarious, film that proves that a story doesn't need to be completely new just as long as there's a spin on it to make it different.

Irresistible...the prime hams and real-life friends share comic timing that can only come from years of experience. [Blu-ray]

Not the best film of the duo Matthau and Lemmon, but, Grumpy Old Men still a funny and charismatic movie about love, life, family, friends and death in old age.

An instant classic! This comedy has all the right timing and Jack Lemmon and Walter Matthau make the funniest pair. Don't skip the end credits either, Burgess Meredith has some of the funniest one-liners I've ever heard!

Just a really funny movie showcasing one of the best duos in comedy. Jack Lemmon and Walter Matthau are as good together 30 years after their first onscreen partnering. While this isn't as well written or as fresh as The Odd Couple, it's such an untapped market. Squabbling old men is somehow one of the most entertaining things to watch. This also has so much heart and honesty thrown in that you simply can't resist falling in love with the characters.

Hey Puts...Hey Moron... Ha ha ha this is absolutely hilarious!!! Cracking up all the way through the movie