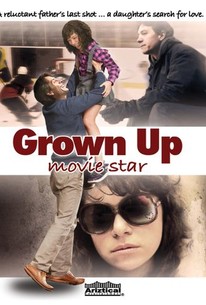 A damaged family struggles to come to terms with their need for love in this comedy-drama from Canadian writer and director Adriana Maggs. Ray (Shawn Doyle) was a local hero in the small Newfoundland town where he grew up when he earned a spot on a major league hockey team, but after playing just one game he was busted for drugs, and after a stretch behind bars he returned home to an unglamorous career as a small time marijuana dealer. Ray is married to Lillian (Sherry White) and they have two daughters, Ruby (Tatiana Maslany) and Rose (Julia Kennedy), but when Lillian leaves her family behind to go to Hollywood in search of stardom, everyone looks for a way to keep the family together. Ray dates nearly every eligible woman in town in hopes of finding a new mother for his daughters, but despite outward appearances he's deep in denial about the fact he's gay. At the age of 13, Ruby is also confused about her sexuality; she's pretty enough to attract the attention of the boys at her school, and finds that dressing and acting like a flirt will get her the attention she craves. But when she asks her handicapped friend Stuart (Jonny Harris) to take some pictures she can send to movie producers in hopes of joining her mother in Hollywood, he encourages her to pose for some compromising shots that fall into the wrong hands. Grown Up Movie Star was an official selection at the 2010 Sundance Film Festival, where Tatiana Maslany received a special jury prize for her breakout performance in the film.

Mark O'Brien (IX)
as Will

Grown Up Movie Star is an awkward mixture of an emotionally intimate coming-of-age story and contrived serio-comic plotting.

It isn't a polished effort, but Maggs delivers a watchable movie thanks to snappy dialogue (also provided by Maggs) and outstanding work from a cast plucked mostly from The Rock.

The dialogue is credible and it crackles along with an underhanded oh-so-Newfoundland wit. But the reason to see this movie is Tatiana Maslany.

Grown Up Movie Star is unruly, tortured, crisis-prone, nervy, melodramatic and just charming enough to make you forgive all of the above. It's like a teenager that way.

A huge disappointment. Perhaps it was a matter of high expectations but the entire production was a true let down. Performances do not match the stellar reviews and the entire tale is rather dull.