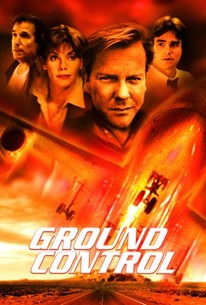 Ground Control follows the reluctant return to work of Jack Harris (Kiefer Sutherland), a retired air traffic controller who is still haunted by his role in a probably unavoidable plane crash that has left him guilt-ridden and professionally gun shy. When a Phoenix airport fighting budget cutbacks calls him in for emergency duty, he begins experiencing flashbacks to the night of the disaster, all while trying desperately not to lose concentration even for the single moment it would take to cause a fresh disaster. He is supported by a seasoned supervisor (Bruce McGill) but challenged by a cocky young controller (Robert Sean Leonard) who not so privately questions his mettle. All must put aside their differences and band together when stormy weather and failing equipment puts another flight in harm's way. The tension mounts as a resourceful mechanic (Henry Winkler) tries to paste together the outdated circuitry and give the skeleton crew technical support beyond their professional cunning. Ground Control also stars Kristy Swanson and Kelly McGillis.

Eleanor Mondale
as Christine
View All

Smartly cast and scary stuff-but I could swear I've seen it before. Not something like it, but this exact movie. Help!

There are no featured audience reviews yet. Click the link below to see what others say about Ground Control!