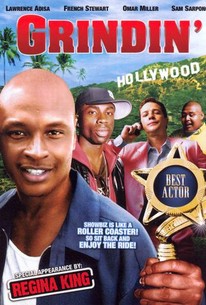 On the eve of his biggest audition to date, an unfocused actor enlists the aid of his show-business buddies in getting his act together and landing the role that could finally launch him into the big time. T.O. (Lawrence Adisa) may be a working actor, but now the all night partying and constant distractions are beginning to take their toll on the once-promising star. Later, T.O. will seek some helpful guidance from good friends Regina King and French Stewart. When all hope seems lost, it begins to appear that the only thing keeping T.O. on his toes is the prospect of losing a potentially lucrative role from longtime nemesis Morris (Sam Sarpong).

Regina King
as Herself

French Stewart
as Himself

There are no critic reviews yet for Grindin. Keep checking Rotten Tomatoes for updates!

There are no featured reviews for Grindin at this time.