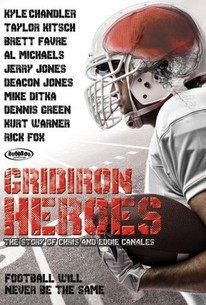 Narrated by Taylor Kitsch. this documentary is the story of high school football star Chris Canales, who was paralyzed in a championship football game. The film chronicles the work of the Gridiron Heroes Spinal Cord Injury Foundation started by Chris and his father Eddie culminating with them both being nominated for the prestigious "CNN HEROES OF THE YEAR" Award. "Gridiron Heroes" exams of the game of football itself starting from the owners of Professional football teams down to the players themselves speaking out. Some of the most famous faces in the game discuss the larger problem of brain damage and spinal cord injuries that occur on the football field and a potential solution, "Heads up Tackling," that is sweeping the nation

There are no critic reviews yet for Gridiron Heroes. Keep checking Rotten Tomatoes for updates!

There are no featured reviews for Gridiron Heroes at this time.