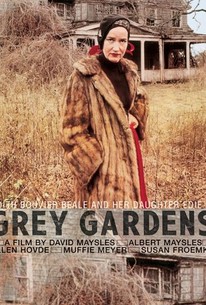 Critics Consensus: Edith and Edie Beale are eccentric subjects who offer a generous amount of themselves in Grey Gardens, an inquisitive and nonjudgmental exploration of the isolated socialites' lifestyle.

Critics Consensus: Edith and Edie Beale are eccentric subjects who offer a generous amount of themselves in Grey Gardens, an inquisitive and nonjudgmental exploration of the isolated socialites' lifestyle.

Critic Consensus: Edith and Edie Beale are eccentric subjects who offer a generous amount of themselves in Grey Gardens, an inquisitive and nonjudgmental exploration of the isolated socialites' lifestyle.

The unbelievable but true story of Mrs. Edith Bouvier Beale and her daughter Edie, the aunt and first cousin of Jacqueline Kennedy Onassis. Mother and daughter live in a world of their own behind the towering privets that surround their decaying 28-room East Hampton mansion known as "Grey Gardens," a place so far gone that the local authorities once threatened to evict them for violating building and sanitation codes. Mrs. Beale, a.k.a. "Big Edie," was born an aristocrat, sister of "Black Jack" Bouvier, Jackie O's father. "Little Edie" was an aspiring actress of striking beauty who put her New York life on hold to care for her mother--and never left her side again. Together they descended into a strange life of dependence and eccentricity that none had ever shared until the Maysles Brothers arrived with their camera and tape recorder in hand.

As tender and revealing as it is completely bonkers.

Edith and Edie are like a toxic vaudeville team, joined not just by blood but affinity. They're three parts folie a deux to two parts shtick.

The beauty of this film is the dignity it imparts to the Beales, trapped in their pasts. They failed to launch, yet paradoxically, they continue to fly so high.

Richly detailed and boundlessly evocative, even at its most claustrophobic.

Rarely have high spirits and theatrical energy seemed like such a tragic waste; an era and its myths seem to be dying on-screen in real time.

The Maysles Brothers (in this film, working with Hovde and Meyer) habitually put human beings on the screen and ask us, simply, to recognize them. For this reason alone, Grey Gardens warrants viewing and support.

The elegance and the decadence of two superstars, as Warhol understanded. A great cinematographic travel to East Hamptons. [Full review in Spanish]

An extraordinarily crafty invasion into the lives of Edith Beale and her daughter Edie.

The film resists a focus on the eponymous house's restoration, instead representing the women's chaotic lives as a non-linear series of moments.

Old-money outcasts, or dropouts by lifestyle choice, the Beale ladies are not condescended to, smirked at or exhibited.

This precursor of modern reality television is cinéma vérité at its best, not just observing or "invading" its subjects' privacy but actually baring naked the insane relationship between these two hilariously eccentric women living together in a decrepit mansion falling apart.

Fascinating. Good cautionary story against living with your mother in your old age!

Edith Beale and her daughter "little Edie," relatives of Jackie Kennedy, live in a decaying mansion in the Hamptons littered with garbage; now in her 50s, the delusional little Edie takes care of her shrewish mother while dreaming of getting married and becoming a professional dancer. Who knew "No Exit" was a documentary?

One of the best portrayals of a relationship committed to film that I've ever seen. A strong testament to both the liberating power and the imprisoning isolation of divorcing oneself from present reality. Staunch characters indeed.