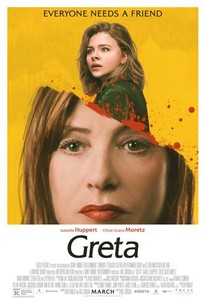 Critics Consensus: A bonkers B movie occasionally elevated by its A-list talent, Greta dives headlong into camp and struggles to stay afloat.

Critics Consensus: A bonkers B movie occasionally elevated by its A-list talent, Greta dives headlong into camp and struggles to stay afloat.

Critic Consensus: A bonkers B movie occasionally elevated by its A-list talent, Greta dives headlong into camp and struggles to stay afloat.

A sweet, naïve young woman trying to make it on her own in New York City, Frances (Chloë Grace Moretz) doesn't think twice about returning the handbag she finds on the subway to its rightful owner. That owner is Greta (Isabelle Huppert), an eccentric French piano teacher with a love for classical music and an aching loneliness. Having recently lost her mother, Frances quickly grows closer to widowed Greta. The two become fast friends - but Greta's maternal charms begin to dissolve and grow increasingly disturbing as Frances discovers that nothing in Greta's life is what it seems in this suspense thriller from Academy Award (R) winning director Neil Jordan.

The film becomes a relatively conventional stalker tale, and the psychological insights of the first act seem for naught.

The pace seldom lags, the cinematography is luscious, and a dream sequence has a clever twist.

Huppert loves to dance on the lacquered surface of civility and then plunge a spiked heel right through it, and for as long as the film is happily indulging her whims, it's a trashily good time.

Huppert should be the next Bond villain.

Huppert lurks and looms, clearly having a blast. At least someone is.

I enjoyed it. It was nice and short.

With Isabelle Huppert as Greta, the mystery and charm that surrounds the character is already built into her persona.

[Y]et as is, the film is not memorable or meaningful.

Is this Neil Jordan's best film? No. Is it Isabelle Huppert's best performance? No. But it's a wonderful pastiche.

FRENCH DRIP - My Review of GRETA (2 1/2 Stars) Thereâ(TM)s nothing wrong with a good pulpy thriller, but as the language of cinema has advanced, it sometimes takes a new approach to pop. GRETA, the new film by Neil Jordan (THE CRYING GAME) and co-writer Ray Wright, brings a lot of fun to the table, a bonkers performance by French screen legend Isabelle Huppert which almost reaches Glenn Close in FATAL ATTRACTION heights, and some classically astute direction, but ultimately, itâ(TM)s fairly stale stuff. The film stars ChloÃ« Grace Moretz as Frances, a gullible New Yorker (the only gullible New Yorker, mind you!) who one day finds a stylish purse left on the subway. Her stupidly funny roomie (are there any other kind in these films?) Erica (IT FOLLOWSâ(TM) Maika Monroe) suggests they keep the money in the handbag and go get colonicsâ¦which if youâ(TM)ve made your rent in New York is a reasonable next option. Frances, however, being from Ohio, returns the purse to its rightful owner, cash and all. Thanks a lot, filmmakers! Iâ(TM)m from Ohio too, and let me tell you a thing or two. Iâ(TM)d return the purse at a neutral spot, but Iâ(TM)m taking those bills to my nearest day spa stat! The owner turns out to be a sweet little French lady named Greta (Huppert), who invites Frances in for tea. They develop a friendship, with Frances playing right into Gretaâ(TM)s maternal affections. One day, however, Frances discovers something about Greta which changes the dynamic completely. To say anymore about the story would spoil everything, but suffice it to say, it turns into an insane psychological thriller complete with some jump scares and a surprisingly gory and memorable sceneâ¦culminating with a shot (literally) you wonâ(TM)t soon forget. Moretz, a very talented actor, gets saddled with the drippy role and rarely behaves like a rational human being. She actually goes into the basement in one sequence. If youâ(TM)ve ever seen a movie before, you know better. Despite Monroeâ(TM)s winning appearance here, the rest of the cast adds nothing. Old Jordan regular, Stephen Rea, has a totally nothing part as a detective, and Colm Feore contributes even less as Francesâ(TM) father. The story, while consistently fun, simply checks off all of the thriller boxes until it comes to its ho-hum conclusionâ¦complete with sequel setup. It all plays like a ripoff of Brian De Palma ripping off Hitchcock, except without split screens and the delicious color palette. Itâ(TM)s drab looking, intentionally so mind you, leaving Huppert to walk away with the film. Huppert, no stranger to edgy roles (just watch THE PIANO TEACHER for Godâ(TM)s sakes!), takes a little detail like chewing gum or just staring and turns it into a master class. Her physicality as she spins and hops around her house felt inspired, and her ability to walk the line between sympathetic and pathological earns her a rightful place in the pantheon of movie monsters. Itâ(TM)s as if Closeâ(TM)s Alex Forrest invaded a French body and spouted âI wonâ(TM)t be ignored" for 98 minutes straight. Huppert handles the violent moments with a chilling force, giving us campy memories and a great idea for this yearâ(TM)s Halloween costume. Sadly, sheâ(TM)s not in a movie which will live in our hearts and minds forever, but perhaps her performance will. It reminded me of 1987â(TM)s THE STEPFATHER, a so-so film with an indelible lead performance. Call GRETA a fun little story for the moment, but letâ(TM)s get to the great movie months already!