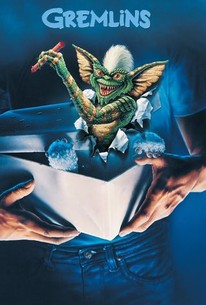 Critics Consensus: Whether you choose to see it as a statement on consumer culture or simply a special effects-heavy popcorn flick, Gremlins is a minor classic.

Critics Consensus: Whether you choose to see it as a statement on consumer culture or simply a special effects-heavy popcorn flick, Gremlins is a minor classic.

Critic Consensus: Whether you choose to see it as a statement on consumer culture or simply a special effects-heavy popcorn flick, Gremlins is a minor classic.

"Don't expose him to bright light. Don't ever get him wet. And don't ever, ever feed him after midnight." This sage advice is ignored midway through Gremlins, with devastating results. This comic Joe Dante effort is set in a Norman Rockwell-esque small town at Christmastime. Seeking a unique gift for his son an erstwhile inventor (Hoyt Axton) purchases a cute, fuzzy little "Mogwai" from a Chinatown shopkeeper's (Keye Luke) grandson (John Louie), who dispenses the above-mentioned warning before closing the deal. Meanwhile, young bank clerk Billy Peltzer (Zach Galligan) must suffer such antagonists as rich-bitch Mrs. Deagle (Polly Holliday) and priggish Gerald (Judge Reinhold) while pursuing his romance with Kate (Phoebe Cates). These and a variety of other plot strands are tied together when the lovable mogwai (named Gizmo) is exposed to bright light and gotten wet. In short order, the town is invaded by nasty, predatory Gremlins, who lay waste to everything in sight as Billy and Kate try to contain the destruction. Like most of Joe Dante's works, Gremlins is chock-full of significant cameo appearances: in this instance, such pop-culture icons as Dick Miller, Jackie Joseph, Chuck Jones, Scott Brady, Harry Carey Jr., Steven Spielberg (the film's executive producer) and even Robby the Robot all show up briefly on screen. ~ Hal Erickson, Rovi

Donald Elson
as Man on Street

Steven Spielberg
as Man in Electric Wheelchair (uncredited)
View All

New on Netflix October 2019
Is HBO Max the Biggest Threat to Netflix Yet?
Game of Thrones Star Heads to Penny Dreadful Revival and More TV News

It is a wacky, satirical spectacle of chaos.

A horror-comedy about cute little Christmas toy/pets who turn into murderous monsters wreaking havoc on a Norman Rockwellian town.

The 1984 creature feature in which a Capra-esque idyll is besieged by ravening beasties.

The humans are little more than dress-extras for the mechanics.

GREMLINS is definitely a product of its time, but it's got a lot of heart.

A film that knows how to masterfully combine terror with humor, family spirit and countless winks to moviegoers, without ever spoiling the mix. [Full Review in Spanish]

Unlike the fabrication of the gremlins, the rest of the movie, with its terrible first part, is clumsier. [Full Review in Spanish]

As a black comedy, a satirical look at consumerism, and a movie bursting with Christmas cheer, no matter the descriptor- Joe Dante's Gremlins is a classic.

Benefits from one of the most underappreciated musical scores of the 1980s.

I think I appreciate this movie as an adult more than I ever did as a child. (Is it even truly a kids film?! Some of it is pretty scary for a child). Though the special effects don't quite hold up and the gremlins are a bit fake looking, it's actually not bad for an 80's movie. And for a so called kids movie, it is a masterpiece. And it's festive, so a perfect December watch (well, my twisted idea of a xmas movie!). Good story to it and quite dark and compelling. Good cast too, Phoebe Cates and Zach Galligan are great.

My foray into 80s Horror/Comedy education begins here. Gizmo is super cute, the explicit scenes of gremlin-cide are campy and hilarious, and I finally know the rules of Mogwai maintenance, as referenced in much pop culture nostalgia. I didn't expect so much violence, nor did I expect the main characters to be adults. The movie could have felt more real this way, but it didn't, and I think that may be due to the flat villains. Mean Mrs. Deagle is so mean that it doesn't MEAN anything. She has no raison d'etre, and nor do the gremlins. They just cause trouble.

For such a serious tone to the film, with such an off-putting idea, "Gremlins" does everything right both in uniqueness and in style. I loved every minute of this film. It is a classic tale of a boy getting a present for Christmas, but this one is an unknown creature (cute and adorable) which becomes much more. Starting from a little pet, it becomes a town infestation. The quirky tone to the film, made by the odd musical score, is something I have never really heard before. A dark scene passes by and you are left wondering why they had uplifting and fun music playing over it. The direction is fantastic, the effects are creepy for it's time, and the film is just very well-made overall. "Gremlins" is fantastic entertainment!