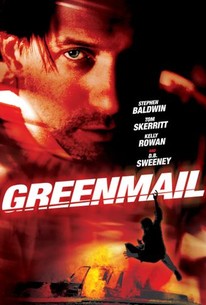 When a dangerous extremist is apprehended by the authorities, a series of deadly bombings force a beautiful but deadly ATF agent into an uneasy alliance in this explosive action thriller from director Jonathan Heap. In the aftermath of a deadly chemical processing plan explosion, ATF agent Ashley Pryor (Kelly Rowan) finally apprehends the man responsible for the destruction -- elusive radical Alexander Scott (Stephen Baldwin). Though at first it appears that Scott's deadly reign of terror has drawn to a close, the earth is soon shaking once again and it appears as if one of Scott's own men has finally lost his grip on reality. Now Agent Pryor's only hope to stop the killings is to place her trust in the very man she staked her career on catching.

There are no critic reviews yet for Greenmail. Keep checking Rotten Tomatoes for updates!

There are no featured audience reviews yet. Click the link below to see what others say about Greenmail!