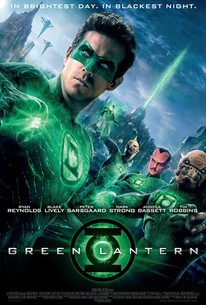 In a universe as vast as it is mysterious, a small but powerful force has existed for centuries. Protectors of peace and justice, they are called the Green Lantern Corps. A brotherhood of warriors sworn to keep intergalactic order, each Green Lantern wears a ring that grants him superpowers. But when a new enemy called Parallax threatens to destroy the balance of power in the Universe, their fate and the fate of Earth lie in the hands of their newest recruit, the first human ever selected: Hal Jordan (Ryan Reynolds). Hal is a gifted and cocky test pilot, but the Green Lanterns have little respect for humans, who have never harnessed the infinite powers of the ring before. -- (C) Warner Bros

How many more of these superheroes can we take?

The green aesthetic misfires: the whole film looks as if it's been inspired by a particular shade of washing-up liquid, or the glowing screens of ancient computers.

A certain tone is needed to carry off the script's manifold absurdities. It has to be tongue-in-cheek rather than foot-in-mouth and Reynolds' success rate is intermittent at best.

Apart from having no particular reason to exist onscreen, especially at these prices, it's not half bad.

The result makes the movie seem assembled from bits and pieces of other superhero yarns rather than existing on a plane of its own.

Among the many things that can be attributed to the movie signed by Campbell, not being entertaining is not one of them. [Full Review in Spanish]

Green Lantern's light faded for me, and was out completely by the time the final credits rolled.

Green Lantern is as cheesy and has more plot holes and dangling story strings than a piece of 70's macrame.

The film never rises above a screenplay that seems to be pulling in several directions, leaving the material battling with tone and consistency. The result is a lifeless attempt at a blockbuster that never quite gets out of the block.

All the prancing about on a galaxy far far away where Hal [Ryan Reynolds] meets the other Green Lanterns, and the wise ancients, and a gigantic gruff sergeant-type who learns him his ropes is all a bit of a bore.

Green Lantern seems to be that one superhero movie that everyone seemed to hate and was extremely panned by critics, and to be honest I don't really see anything really insanely bad about it like everyone else. While yes I think Ryan Reynolds as Hal Jordan is a strange choice and feel more like he could play the Flash more than the Green Lantern, one of my favorite Superheroes but he does the role actually pretty well in my mind and he is pretty funny IMO. Many of the actors actually do pretty good jobs too, except for two, Tim Robbins and Peter Sarsgaard. While I love Robbins in films like Shawshank Redemption, he really is given almost nothing to work with in this film at all, he is mainly just there and does almost nothing the whole film and Sarsgaard is just so obnoxious in the movie and really just feels almost pointless and especially since he was not really as involved or as big of a villain in the comics (I did like how he had a Pokemon Sapphire game in his house which was pretty funny). The effects in the film also all look great especially the fantastic designs of all of the different Lanterns during the scene where all the lanterns meet to discuss the problem of Parallax, which he is a fantastic effect in and of itself (plus it was awesome to have Clancy "Mr. Krabs, Mr. Freeze" Brown play him).

I'm surprised to see that so many people hated this movie, since it is not bad but rather an entertaining superhero movie (despite an irregular CGI) with good dialogue and decent acting, especially from Peter Sarsgaard, who seems to be having a lot of fun as the bad guy.

Not just fear ... but fear from space, space fear, yellow-colored space fear threatens home sweet home ... what's a world to do? Luckily, our hero enters: the jock next door, more irreverent than Mad magazine, able to leap over discarded girlfriends with a single bound, and that's only his entrance. There's fun to be had as this superhero dreams his power up on the spot, if only the work had been better thunk out. Its a summertime movie, so whatever.

After reading a handful of bad reviews i went into this expecting a giant pile of turd. Now granted I don't dislike many movies. Everything has its good qualities. And I have enjoyed several recent movies that others have disliked. That said my expectations had been seriously lowered going in and well, it wasnt as bad as I expected. The movie had somewhat decent acting across the board. Nothing great, just good enough for what the actors were given with. The movie relied heavily on CGI for its otherworldly Corp Members and settings. These were not bad just a huge chunk of the movie. Up against both Thor and X-Men First Class the movie had little to no deeper story. Both of those two movies this summer had a bit more going for them story wise.. There seemed to be some parts that did feel a bit rushed. overall though I enjoyed the movie.