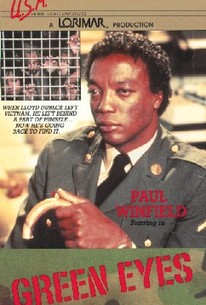 The made-for-TV Green Eyes stars Paul Winfield as a Vietnam veteran who feels like a fish out of water in civilian life. Shunned by his family and friends and pushed aside by the Establishment, Winfield decides to find the one person who truly needs him. That person is the Vietnamese child whom he fathered and left behind in Saigon. Burrowing through miles of red tape and wandering the bombed-out Vietnamese streets, Winfield searches for his lost son. Filmed in the Philippines, Green Eyes originally aired January 3, 1977.

Robert DoQui
as Hal
View All

There are no critic reviews yet for Green Eyes. Keep checking Rotten Tomatoes for updates!

There are no featured reviews for Green Eyes at this time.