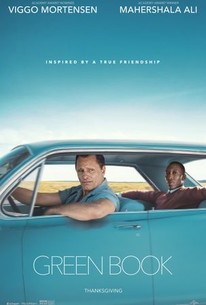 When Tony Lip (Mortensen), a bouncer from an Italian-American neighborhood in the Bronx, is hired to drive Dr. Don Shirley (Ali), a world-class Black pianist, on a concert tour from Manhattan to the Deep South, they must rely on "The Green Book" to guide them to the few establishments that were then safe for African-Americans. Confronted with racism, danger-as well as unexpected humanity and humor-they are forced to set aside differences to survive and thrive on the journey of a lifetime.

Paul Sloan
as Carmine
View All

An enthusiastic and well-intentioned but ultimately clichéd approach is abundantly evident in the final product.

Green Book is a glib, caricatured and insensitive movie that reduces an enduring, dangerous societal problem to a calculated fable with a happy ending. [Full review in Japanese]

Is it a feel-good charmer poised to rake in greenbacks and Oscar gold? You bet! But don't let that keep you away from this overall well balanced (and timed) look forward from the safe distance of America's motley past.

The screenplay essentially turns Shirley into a black man who thematically shapeshifts into whoever will make the story appealing to white audiences - and that's inexcusable.

[A] flawed but oddly joyful movie elevated far above its limitations by two sublime performances.

A bizarre fish-out-of-water comedy masquerading as a serious awards-season contender by pretending to address the deep wound of racial inequality while demonstrating its profound inability, intellectually and dramatically, to do that.

While many might see this as a nice feel-good predictable film, they also forget that this was a story that needed to be told and was told because of the great outcome.

It's inoffensive and emotionally generous and competently, if not imaginatively, shot. The colors are bright, the scenery pleasant. Both main characters get plenty of laugh lines.

Green Book is well-meaning and competently made, but anodyne and ultimately ephemeral entertainment.

It is easy to label Green Book as predictable, but it is an entertaining feel-good film - with Ali and Mortensen delivering distinct, endearing performances.

There are too many cringe-worthy moments... where Tommy becomes Shirley's 'white savior.'

It has a pleasing and homey aesthetic which befits the easy-going tone. Linda Cardellini brings sunlight and sincerity to a threadbare role as Tony Lip's wife and Director Peter Farrelly is never heavy-handed with the sentimentality.

The feel-good movie of the year is this simplistic bromance that doesn't understand its own characters and couldn't ring less true even if it tried - no matter how committed the actors are, playing these walking caricatures so that a white audience can go home feeling tolerant.

Green Book plays like a twenty-first century rendition of Driving Miss Daisy, a well-meaning and relatively gentle movie about race relations where a prejudiced white person comes about thanks to their firsthand friendship with an African-American male. It's reportedly inspired by the true story of Tony Lip (Viggo Mortensen), a nightclub bouncer, driving around a famed pianist, Dr. Don Shirley (Mahershala Ali), as he performed throughout the South in 1962. The best part of the movie is the character interaction between this odd couple, and you'll get plenty of it too. The actors burrow into their very distinctly conflicting characters, so it's a natural pleasure to watch them eventually bond and learn from one another. This is the kind of racism that doesn't make people feel too uncomfortable, and you could say that about the film as a whole. It's a bit safe and has its intentions set on being a big, inclusive crowd-pleaser, and it plays like one. There are moments to make you laugh, moments to make you cheer, and moments to make you tear up. Morstensen and Ali are terrific together and find dignity and humanity in characters that could have easily become one-note stereotypes. The more we learn about Dr. Shirley the more interesting he becomes, a man used to feeling like an outsider no matter the company he keeps. Watching the two men grow and open up to one another can be heartwarming and deeply satisfying. Remarkably, the film is directed and co-written by one half of the Farrelly brothers, the pair responsible for ribald comedies like There's Something About Mary and Dumb and Dumber. It's an easy movie to fall for, with its winning formula and enjoyable actors, but there's a little nagging concern I have that Green Book is too safe, too straight, and too pat in its life lessons. Despite its Best Picture win, it's not like Driving Miss Daisy has any lasting cultural impression, and I wonder if maybe Green Book is destined for the same. Still, the acting and writing is enough to bring a smile to your face and remind one's self about the power of kindness. Nate's Grade: B

Usually, when a film is made and has very little depth in terms of storytelling, it would be forgotten about, but if you have a unique take on a specific story and the point of the movie is to keep it simple and explore only one facet of history. Personally, I prefer when stories are a little more fleshed out, but I also believe this simple story in Green Book is one of the best films of 2018. This is a movie that cares about its characters first and foremost and we donâ(TM)t see many of those films hitting the big screen very often, so this was a pleasant surprise. Although thereâ(TM)s not much meat to the story (which may bore some viewers), I found Green Book to be a fantastic piece of filmmaking. Fired from the downtown club and forced to take any job he can in order to support his family, Tony Lip (Viggo Mortensen) decides to take on the role of driving pianist Dr. Don Shirley (Mahershala Ali) across the South, as he and his band perform for audiences. With the inclusion of the fact that Don is an African-American man in the 1960s and Tony being an Italian-American, many racial occurrences arise for these two. Being an unlikely pairing for that particular decade, these characters needed to be like-able and completely fleshed out in order for this film to work and those two aspects were absolutely astoundingly well-done in my opinion. This also stems from a particularly great turn by director Peter Farrelly. Although his earlier work on films like Dumb and Dumber and Thereâ(TM)s Something About Mary are very commendable outings, his recent comedies havenâ(TM)t exactly struck gold. Having his last few films being Dumb and Dumber To, Hall Pass, and The Heartbreak Kid, I was very worried about him taking on a more dramatic film. After watching this film, I felt ridiculous even thinking that, because not only has he shown maturity as a director this time around, but also completely understood how to blend his sense of humour with a more meaningful premise. If he sticks with this style of filmmaking, I can definitely see his name in the public eye more often in the coming years. The way he handles his performers here was truly something special. As I said, it truly is the character arcs that carry this film and without amazing performances, this movie wouldâ(TM)ve been forgotten. Mortensen and Ali both give their all in these roles and it shows. There wasnâ(TM)t a single moment where I found myself scratching my head or not believing a decision they made or line of dialogue they spoke. In the vein of films like Driving Miss Daisy or even Before Sunrise, the conversations are the reason this film doesnâ(TM)t feel slow. Thereâ(TM)s hardly a single exciting scene and the movie clocks in at nearly 140 minutes. Thatâ(TM)s when you know the dialogue has been written very well by the trio in Nick Vallelonga, Brian Hayes Currie, and Peter Farrelly. In the end, I canâ(TM)t see everyone loving this film, due to the slow pace it has, but itâ(TM)s a breezy crowd-pleaser nonetheless. This movie has been generating major awards consideration and I think it deserves every bit of it and then some. I loved my experience watching this movie and I canâ(TM)t wait to revisit it and take this journey with these characters again. Funny, sad, and heartwarming, Green Book easily earns the title of being one of the best feel-good movies in recent memory (at least to me). I loved this movie and I canâ(TM)t recommend it enough.