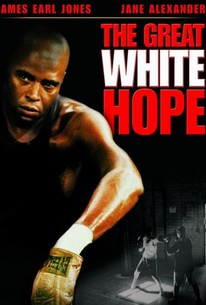 Although the characters' names were changed, The Great White Hope was a thinly veiled account of the trials and tribulations of boxer Jack Johnson, based on the play by Howard Sackler and directed by Martin Ritt. James Earl Jones stars as boxing great Jack Jefferson, who defeats Frank Bardy Larry Pennell in a Reno, Nevada bout to become the world's first black heavyweight champion. After crossing a state line with his white girlfriend Eleanor (Jane Alexander in her feature debut), however, Jack is arrested and tried under the miscegenation-barring Mann Act. Found guilty and sentenced to three years in prison, Jack escapes and leaves the U.S., but he's dogged by his now bad reputation and can't get honest work as a fighter. Offered his freedom from criminal charges if he'll agree to a fixed fight in Cuba that will restore the title to a white contender, Jack refuses and Eleanor commits suicide, their life on the run overwhelming her. Jack finally accepts the bout in Havana, but he fights his opponent with everything he's got.

Jim Beattie
as The Kid

24 Stars Who Dominated the Boxing Ring

Jones' re-creation of his stage role is an eye-riveting experience. The towering rages and unrestrained joys of which his character was capable are portrayed larger than life.

One of those liberal, well-meaning, fervently uncontroversial works that pretend to tackle contemporary problems by finding analogies at a safe remove in history.

This heavyweight boxing fable... has a knockout performance by James Earl Jones but it only just gets by on points as drama and is undermined by an early form of political correctness.

The movie is too theatrical and every idea is spelled out for the audience, but the acting of James Earl Jones and Jane Alexander (both Oscar-nominated) is good.

The love story between Alexander and Jones is touchingly portrayed.

I've been liking me some Marty Ritt films lately, an undiscovered gem for me, and though not quite up to his usual stuff this one'll do in a pinch. When it first came out lo those many, many years ago (We were so poor, we didn't even have rocks) it proved highly impactful to the rest of my life and certainly my worldview. Now though, many of the seams are plain to see, for instance how much of the stage play aspects of the thing remain intact. James Earl Jones doesn't really have much of a range to explore his character and the same is true for the underdeveloped but centrally decisive Jane Alexander character. And the point of the thing, the grinding racism of the most free nation on the earth and how it adversely affects the lives of individuals isn't given its full scope. Nonetheless the flavor of the idea is present and enough to engage. In a supposedly free country where an essential kernal of life is the denial of perpetuating an oppressive condition, this piece still speaks volumes.

Howard Sackler's screenplay holds pretty closely to his stage play script, which I read shortly before watching this. The interracial relationship between Jack Jefferson (Jones), who represented real-life heavyweight champ Jack Johnson, and Eleanor (Alexander) is the most interesting feature of the story. Sure the period details provide a unique setting. The sports lingo of the early part of the twentieth century along with the racial slurs show a world that has rarely been presented on the screen. As Jack dodges the charges brought against him under the Mann Act by moving around internationally, the different cultures of the different countries are not so clearly represented, although the fact that the world was racist and not just America comes across well. The final boxing match scene in the play is all from the point of view of spectators outside the stadium. With the cinematic representation, we do get to see the two men slug it out. Though the makeup for this final fight scene is not very natural, James Earl Jones as Jack gives a performance throughout that shows both Jack's defiant energy and his defeated exhaustion.

The actual history is quite distorted but both James Earl Jones and Jane Alexander give great performances.

a fictionalized account of the fascinating life of jack johnson, the first black world heavyweight champ, 1908-1915, played powerfully by james earl jones. for the incredible true story of perhaps the greatest heavyweight champ of all time, see ken burns' terrific pbs documentary unforgivable blackness: the rise and fall of jack johnson ~5 stars if i could find it in flixster's database!