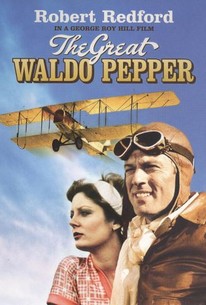 Former WWI pilot Waldo Pepper works in an air show. After losing his performance permit, he gets a job as a movie stunt pilot. On the set, he meets a former German ace. The film ends with both men proving to themselves what they'd failed to prove during the war.

It doesn't have any big notions about the passing of that era, or of the barnstormers, who are seen as overgrown kids with wonderful toys that fly. But it has a good feeling for the period, and director George Roy Hill gives us poignancy and adventure.

It has all the elements of a fantastic, touching movie, except one - a script that engages the audience's interest.

The Great Waldo Pepper is vastly entertaining and a good deal more besides.

It's hard to believe it now, but there was a time that if you had an airplane you could fly it anywhere, anytime, and you could use the gas from any gas station. This story takes place at the end of that era. Redford plays a good pilot who is untested, in his own eyes and in the eyes of his fellows and watches anxiously as the chance for that testing slips away. Already the feds are moving in with their laws and regulations, fencing off the sky itself. George Roy Hill, the director and a pilot himself (along with William Goldman, writer, and Henry Mancini doing the music) capture the breezy spirit of that freedom, the freedom of the air, and those times with some melancholy and longing.

The airplane stunts in this movie are exciting, and the drama in the movie is pretty good, and it's kind of sad too. I hated the end, though. This movie was good, but it could have been better.