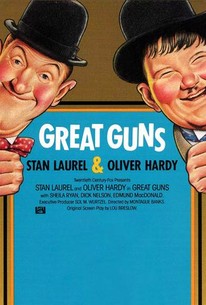 In their first 20th Century-Fox vehicle, Stan Laurel and Oliver Hardy are cast respectively as the butler and chauffeur of wealthy young Dan Forrester (Dick Nelson). Tired of being pampered and coddled by his overprotective aunts (Mae Marsh, Ethel Gryffies), Dan is delighted when he is drafted into the Army. To make certain that no harm will befall their "frail" master, Stan and Ollie also don uniform and accompany Dan to US Cavalry training camp. While the boys get mixed up in one disaster after another-at one point, they find themselves behind a moving target on the rifle range-Dan pursues a romance with photo-shop proprietor Ginger Hammond (Sheila Ryan), much to the consternation of Ginger's erstwhile beau Sergeant Hippo (Edmund MacDonald). Convinced that Ginger is a gold-digger, Stan and Ollie try to break up the romance, to no avail. All plotlines are resolved during a climactic "sham battle", wherein Dan proves his courage and grit while Laurel & Hardy end up captured by the "enemy". Obviously inspired by the success of Abbott & Costello's Buck Privates (it's even more obvious in the earlier drafts of the script), Great Guns is a major letdown from Laurel & Hardy's previous starring features at Hal Roach Studios, with Stan and Ollie looking most uncomfortable as they mouth the inanities written for them by Lou Breslow. Still, a few good bits emerge, including a surrealistic routine with a faulty light bulb and an amusing bridge-building sequence. Watch for Alan Ladd in a jaunty bit role as a camera-store customer.

There are no critic reviews yet for Great Guns. Keep checking Rotten Tomatoes for updates!

There are no featured audience reviews yet. Click the link below to see what others say about Great Guns!