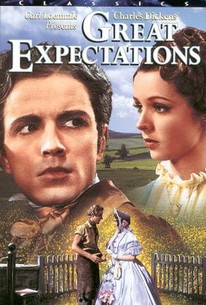 Twelve years before David Lean's definitive filmization of Dickens' Great Expectations, Hollywood had a go at the novel, with mixed results. The story is the familiar one of young Pip (George Breakstone as a boy, Phillips Holmes as an adult) whose future wealth is assured through the auspices of a mysterious benefactor. It turns out that Pip's "guardian angel" is condemned convict Magwich (Henry Hull), repaying a favor the lad had done for him years earlier. The film is a faithful if rather rushed adaptation of the Dickens original, encompassing within its 100-minute running time such unforgettable characters as the vindictive recluse Miss Havisham, the arrogant Estella, the likeable blacksmith Joe Gargery and Joe's less likeable wife. Henry Hull is overly mannered as Magwich and Florence Reed is distressingly dull as Miss Havisham, but Jane Wyatt and Alan Hale are perfectly cast as Estella and Gargery, respectively. Francis L. Sullivan, playing lawyer Jaggers, repeated the role in the 1946 David Lean film. And if you pay close attention, you'll spot Walter Brennan as one of Magwich's fellow convicts. The 1934 Great Expectations is neat and precise, but nowhere near as inspired as the celebrated remake.

Valerie Hobson
as Biddy
View All

An exciting version of the Dickens novel, pungent with the original flavour and spirit, well-acted...

There are no featured reviews for Great Expectations at this time.