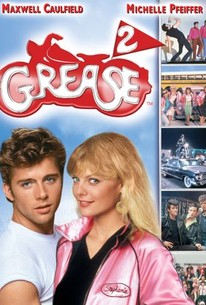 Critics Consensus: Grease 2 is undeniably stocked with solid songs and well-choreographed dance sequences, but there's no getting around the fact that it's a blatant retread of its far more entertaining predecessor.

Critics Consensus: Grease 2 is undeniably stocked with solid songs and well-choreographed dance sequences, but there's no getting around the fact that it's a blatant retread of its far more entertaining predecessor.

Critic Consensus: Grease 2 is undeniably stocked with solid songs and well-choreographed dance sequences, but there's no getting around the fact that it's a blatant retread of its far more entertaining predecessor.

Given the runaway success of Grease, which became the biggest-grossing movie musical of all time, it was all but inevitable that there would be a sequel, and four years later this follow-up brought a new group of kids back to Rydell High. It's 1961, and Stephanie Zinone (Michelle Pfeiffer) is the tough leader of the Pink Ladies, while Michael Carrington (Maxwell Caulfield) is a clean-cut British exchange student. Michael likes Stephanie, but the Pink Ladies' by-laws prevent her from dating guys who aren't members of the T-Birds, their affiliated male gang. However, when a Zorro-like masked avenger on a motorcycle rescues Stephanie from a gang of ill-mannered toughs, she's eager to get to know the hero with the cool wheels. Any guesses as to who he might be? Eve Arden, Sid Caesar, and Dody Goodman return from the first film as members of the Rydell High faculty, while actual '50s teen icons Tab Hunter and Connie Stevens are on board as new members of the staff; Didi Conn as Frenchy is the only one of the students to appear in both movies. Patricia Birch, who served as choreographer on Grease, made her debut as a director on Grease 2; while she's remained active as a choreographer, she hasn't directed again since.

Unlike Grease's "cool" Rizzo (Stockard Channing), Stephanie doesn't have to be mean to anyone who doesn't fit into her Pink Lady standard. She's just cool, period.

The singing, dancing and staging isn't memorable in Grease 2. It's just imaginative and energetic enough to keep you interested. The same can be said for the whole film.

I don't mean to deny the self-evident second-rateness of the project, just to suggest that it's preferable to the third-rateness that has become the norm in the genre.

Grease 2 is the most serendipitous sequel in recent memory. It is an ingratiating, jubilant improvement on a crummy original.

Where this film has a decided edge on its predecessor is in the staging and cutting of the musical sequences.

The original was a hard act to follow but this energetic sequel floats on a raft of ditties from the likes of Tab Hunter and Connie Stevens. That said, the questionable 'Reproduction' has to be heard to be believed.

It is, in fact, something of a camp classic, enjoyable on its own terms and boasting a marvellously insouciant performance from Pfeiffer as the leader of the Pink Ladies.

Grease 2 is a film with a female protagonist who is unabashedly herself to the judgment of her peers.

Aimless and horribly dull, with its vigorous group dances failing to compensate for the insipid songs.

It doesn't work, but you could spend the time spotting relatives of the stars.

Definitely of the so-bad-it's-almost-good genre, this kinda stands the test of time in a camp way, mainly because of the charm of Pfeiffer and Carrington.

In an attempt to topple its predecessor, Grease 2 fails to concoct even a remotely decent storyline. The progressive, incoherent plot and faltering chemistry only taints the name of this famed musical. Arguably one the worse, if not, the worst sequel in the history of film. .5/5

An unnecessary and silly sequel to musical classic, Grease.

A horrible sequel to Grease, a classic musical. This one has very silly songs that don't have anything to do with the story. I hate it.

The music was awful, the plot was thick as oatmeal, and the dialouge felt like cheap vinyl. The only thing they did right was cast Michelle Pfeiffer, who's a decent singer and dancer. Otherwise, there's the whole, "A little piece of me died," thing.