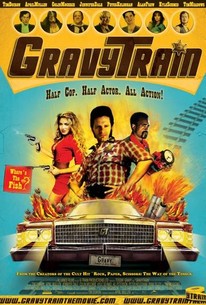 Top Gypsy Creek cop Charles "Chuck" Gravytrain (Tim Doiron) sets out to avenge his pappy's death by sending local criminal Jimmy Fish Eyes up the river in this quirky Canadian comedy from actress/director April Mullen (Rock, Paper, Scissors: The Way of the Tosser). But as Chuck and his sexy partner Miss Uma Booma (Mullen) turn their suspicions toward local snuff-film producer Hansel Suppledick (Ryan Tilley), they find themselves the targets of an elaborate frame-up. Now time is running out fast, and should Chuck and Miss Uma Booma fail to track down Jimmy Fish Eyes, they may wind up serving time for a crime they didn't commit. Featuring Tim Meadows.

It's like Starsky and Hutch in a head-on crash with The Monkees, and it's demented. But the joke fades fast.

There are no featured reviews for GravyTrain at this time.