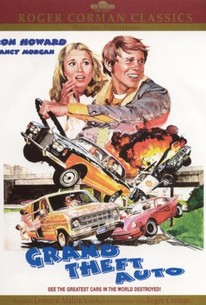 In exchange for being allowed to make his directorial debut in Grand Theft Auto, Ron Howard agreed to take no salary as a director, merely as star and co-screenwriter (with his dad Rance). The plot finds Sam Freeman (Howard) eloping with his heiress girlfriend Paula Powers (Nancy Morgan). Her mob-connected dad Bigby Powers (Barry Cahill) vehemently opposes the marriage, and isn't about to change his mind now that Sam has stolen his Rolls-Royce and sped off to Las Vegas with his daughter in tow. Marion Ross, Howard's Happy Days mom, turns in an offbeat supporting characterization.

Todd McCarthy
as Reporter
View All

A typical Chase-n-Crash, made more entertaining than most because of the attractive personalities of [Ron] Howard and Nancy Morgan...

...runs out of steam long before it reaches its crowd-pleasing conclusion.

This is by no means a terrible movie, but I think we can all be thankful that Howard got this out of his system early on.

...eighty-four minutes never felt like so long a ride.

Unpretentious fun from a soon-to-be-great director

An heiress steals Daddy's Rolls Royce ("that's my baby!") so she can marry Joe Average which then escalates into a its-for-laughs 'zany' cross-country car chase. There's plenty of car crashes afterwards to hide that there's zero characterization. Even the romance, the driving impetus for this movie about driving, seems an unfortunate afterthought. Blasé.

An action comedy involving car chasing and crashes of all kinds, but it also has a great, funny story. I really liked this movie, it's entertaining and enjoyable.