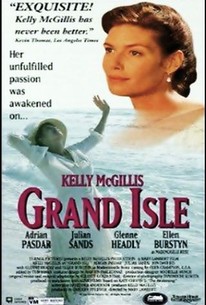 Set in 19th-century Louisiana, the made-for-cable film The Grand Isle is about a wealthy woman (Kelly McGillis) who discovers that she no longer believes in her pampered life as a socialite when she falls in love with a Creole artist (Adrian Pasdar). After she falls in love, she tragically tries to break away from her husband and his society. The Grand Isle is adapted from Kate Chopin's novel, The Awakening.

There are no critic reviews yet for Grand Isle. Keep checking Rotten Tomatoes for updates!

There are no featured reviews for Grand Isle at this time.